It’s not quite a lighthouse, in that there’s no light and it’s not a house, but I do like this photo I’ve been sent. The marker is placed to warn of a hidden object underwater. 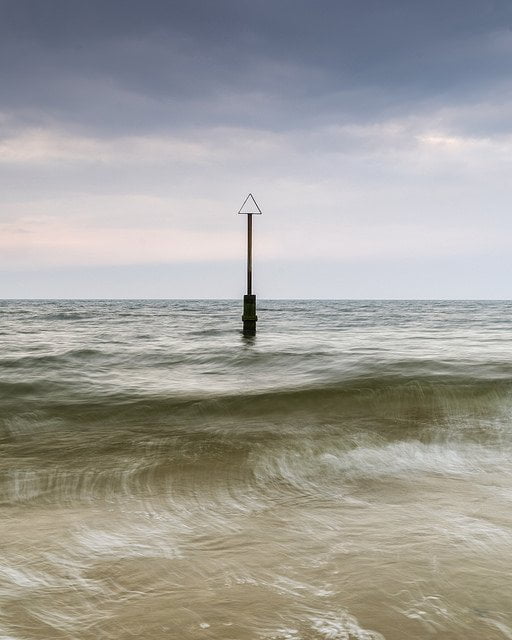 The movement of the water in the foreground, fading towards the horizon, and juxtaposed against the very still, very solid warning marker. Great use of a longer exposure: maybe even as much as a second here?

It’s probably just full on exhaustion, coupled with the disbelief of what actually occurred last night, but I’m not really able to function today. That said, we did take the opportunity to enjoy a childless meander back from Rocking the Daisies. And I’m back home in one piece, so it can’t be that bad.

Suffice to say, Skunk Anansie’s performance last night comprehensively knocked the Manic Street Preachers’ 2003 Glastonbury set from its comfortable spot on the throne of Best Gig I’ve Been To Land. 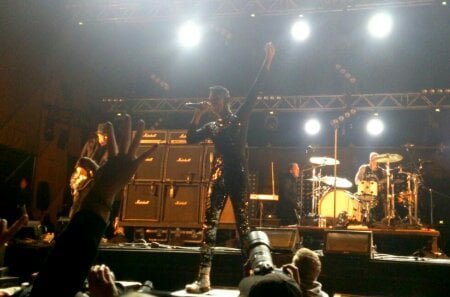 Being right down at the front is always a bonus, and I was ready to be impressed after dreary Alt-J and the zany warm-up from The Hives. But Skin and the boys made it extra special, with a breathtakingly energetic and interactive performance, including her standing on my shoulders and holding my hand – this one here, goddammit! [holds up left hand] – while she belted out Weak.
I went back 15 years in an instant.

There was stage diving (some organised, most not so much), there was power and presence, and there was even some classic rock’n’roll violence as Skin ended the band’s one year tour by putting her microphone stand through the drum kit after their final song.
The gaggle of disbelieving road crew gathered round the damaged kit pointing and taking cellphone pictures afterwards suggested that it was a wholly impromptu and unexpected act.

This morning, I woke up with this in the room: 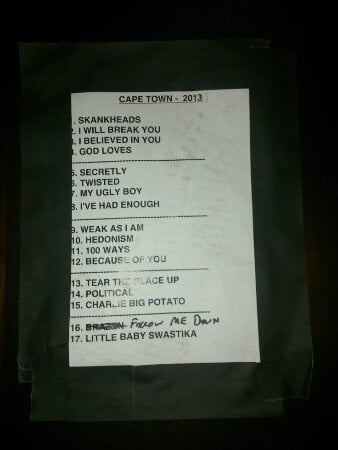 A piece of memorabilia that I will certainly cherish and quite possibly frame.
If you look carefully, you can even make out the print of Skin’s studded silver boot. Sadly, having checked, there’s no such print on my jacket, but I’ve still got the memories.

I Hope You Get To Meet Your Hero they sang; last night, I kinda think I did.

Incoming from Cambridge band Alt-J who apparently played at the Tramlines Festival in Sheffield this year.
I’m not sure how long this has been doing the rounds overseas, but it’s a relative newcomer to SA and I’m really enjoying it. That probably has more to do with the heavy piano chord introduction and the messy percussion throughout than the fact that the lead singer looks a bit like Howard Moon from The Mighty Boosh.

The official video is here, but it doesn’t do much for me.

The painting on which the video is based “The School of Athens” shows the brightest and best of their day, the people lauded as great, who commanded the most respect in society. The contrast is to show what has become most respected in out society – money, women, empty fame and bravado, these are the things argued over and lauded now. The LA Gangster schtick works well as visual shorthand for this.

Since I agree with the sentiment, maybe I just don’t like looking at chavs.