I like it when local businesses do well. I especially like when they do well because they offer really good service.

Getwine springs immediately to mind. I ordered from them again today, as it happens, and I have enthused about them before on here several times.

And now, step forward The Fireman:

They were very good when I ordered from them pre-winter, and now I find myself requiring a refill, they’ve been very good again. Here’s the email I got this morning:

We have been so incredibly busy that demand is currently exceeding supply and despite working around the clock, our farmers are struggling to keep up at the moment.  We have the dry wood stock at the farms so supply will not be a problem, and have just mobilised two more camps of staff to increase our logging production levels. We hope we will have caught up to have a surplus stock level at the depot by early next week. At the moment, every single bag of the stock that arrives has already been allocated by previously booked appointments so goes straight out to someone’s house! We thought we had projected a sufficient chopped supply for this season but we think because of our commitment to only providing dry wood, on time and with a smile, we have been a lot busier than expected.

We can offer you a delivery on [date] at [time] if this is convenient for you?

It turns out that [date] and [time] is very convenient for me, and – despite their apparent struggles – is really not ever so far away. What’s more, I’m confident that they will turn up when they say they will, with a truckload of dry wood and a smile. Delivery is included and they’ll stack the wood for free.

So, if you are after firewood in Cape Town, please go to their site and support them some more.

Occasionally, people get in touch wanting paid links or sponsored posts. I can choose to be very selective with these, because I know that the blog isn’t my source of income, and I’ll always tell you if I am endorsing a product in exchange for cold, hard cash of course.

So when I say something is good, you’ll know that you can believe what I am saying.
And, looking around at other Cape Town blogs, doesn’t that make a refreshing change?

We left it (quite) late to go and see this, and it’s in no way a cheap day out. In fact, it’s neither cheap, nor a day out – but it IS definitely worth your time and money to go and see it.

We went down at 9 o’clock on a Sunday morning (this one, in fact) and despite struggling to get into the actual building it was being staged in, which didn’t open til later, had a fantastic time.
It’s one of those things where you can spend as much or as little time as you want on the way around, but each and every exhibit you see is more breathtaking than the last. The time, effort, patience and detail that’s gone into the sculptures is incredible. Each of the pieces has a short description next to it, which includes the number of bricks used. Most are well into 5 figures. Wow. 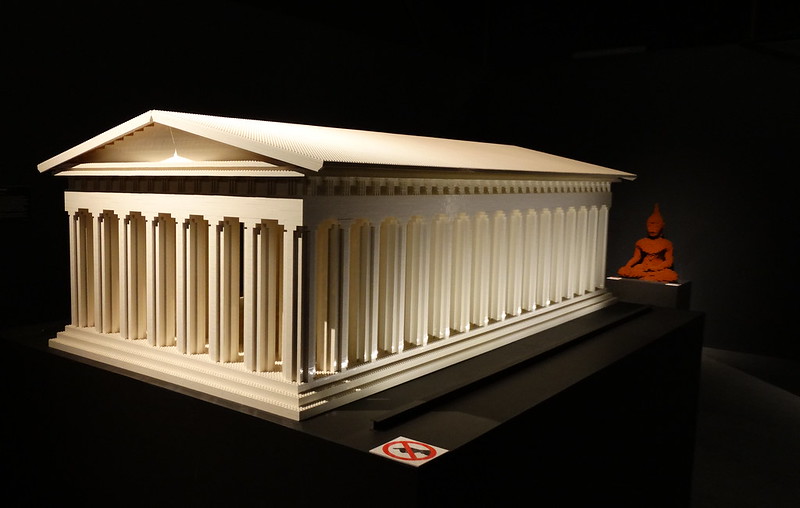 The short video introduction by the artist, Nathan Sawaya, was a little ‘American motivational chat show’ for my liking, but when you see the work he has created, you almost want to know exactly how or why he does it. The exhibition is beautifully laid out, cleverly lit (although it does make for difficult photography conditions) and, as I said above, awe-inspiring. It’s fun, it’s serious, it’s whatever you want to make of it – much like Lego – there are no rules.

At the end, there’s even a couple of rooms and an outside area where you can build and create from Lego yourself.
I made a little Table Mountain. It was amazing.

Photos are on my Flickr, but don’t really do it justice (in any way, shape or form).
Go, see, enjoy.
#6000Recommends

I’m not sure that those still count as modern day working hours, but in the absence of any other more recent popular country pop music hit which includes a reasonable update, we’re going to have to assume that they do.

And, given that I placed my wine order with Getwine at 4pm yesterday and that they delivered at 10am today, that means that it took just 2 (two) working hours for my delicious wine to arrive on my doorstep.

Amazingly, that’s not even the fastest delivery I’ve had from them. That stands at an incredible 44 minutes, although to be fair, they were as surprised about that as I was.

If you want to enjoy great wine at decent prices together with that amazing service, simply click here and I’ll send you a referral.

Disclosure: This is a personal recommendation and not a sponsored post.
No payment in cash or kind was made to me by Getwine.