I’m not in London, but if I was in London, I would be going to the 6 Music Festival. Not today, obviously – it doesn’t happen for another six weeks, so I very much doubt that they’d let me in to any of the venues just yet. 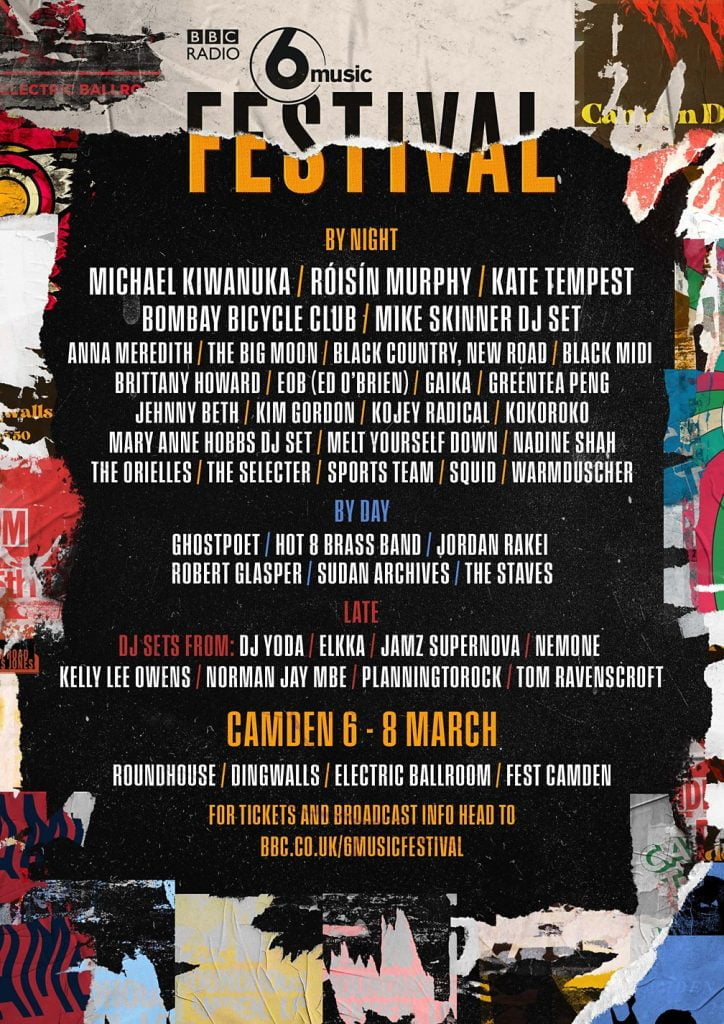 This time around though (for me, I do reali… oh never mind) they’ve really hit the mark. I’ve been doing some rudimentary calculations, and I could happily listen to at least two-thirds of what’s on offer this time around.

But there’s an awful lot of good music there, and although I’m not in London, I am looking forward to listening to some great stuff from the festival.

February is very much the month of love, and so – given that I’m running out of time and energy to blog (or do anything else today), here’s a beautiful song from Ex:Re (it’s pronounced like the skeleton photo thing) from the 6 Music Live Room: Romance.

Yeah, sadly this is about how unromantic this particular encounter and relationship was. So maybe this isn’t the one you’re looking for for Valentine’s Day.

Quirky moments on this live version include the synth player starting by hiding under her keyboard, and – let’s face it – everything that the drummer does. Look out for his silent silhouetted screams as he fits and starts over the drum kit.

Great song. And I love the way that despite how simple it is, there’s real enjoyment and feeling from all of the performers.

No, not sausages or sketchy cars. Some top tunes.

It was at that point that I tweeted about it. I surely couldn’t have been the only one who had noticed this amazing sequence. Those of you willing to do the hard yards having clicked through on that link will note that it was retweeted by the show account and by “DJ” Tom Ravenscroft himself, by the way.

The thing is, the pressure was then on. Surely Tom couldn’t keep it going, filling 3 hours with barely a foot placed incorrectly? It stands to reason that it can’t come that close to perfection, right? Right.
But no, he only went and did it.

I’ve said before (often) that BBC 6 Music is my spiritual home as far as music listening goes. So it makes sense that as a listener, I would generally enjoy the majority of the music played on there. But that doesn’t mean that I like every song. That would be ridiculous.
So to line up 40+ songs of which I liked… well… 40+ of them, must be some sort of record.

I’d hate you to miss out on this incredible show, themed around nothing other than the 6 Music playlist and Mr Ravenscroft’s very good taste, and I’d hate to forget just which songs made me feel this way, so I (roughly) PDF’d the show page for posterity.

And, because words are nothing (in this context) without music, I popped it on a Spotify playlist for you (and me) as well.

Ideally, ignore the Shuffle Play option and listen to it all as Tom intended.
I can’t help with Mogwai’s Party in the Dark (6 Music Live at Maida Vale 2017), Skee Mask’s Rev8617 or lié’s Fill It Up  because Spotify doesn’t have those tracks available. But you get the idea.

I don’t often run as far as rampant hyperbole. In fact, I usually shy away from any such nonsense. But this might have been the best radio show that I have ever listened to.

BBC radio station 6 Music recently looked at six different things that annoy people about live music events, and asked how best to solve them. Here they are in their (apparently random) order.

Mobile phones. Not them ringing; them filming. Are they really an issue? Relatively early on in the bit of my life which contained cellphones and concerts, I recognised that I would rather enjoy the concert experience than take photos or videos. A couple of pics for the blog, and I’m done. None of this recording of entire songs business. The sound quality is crap (in comparison with the real thing) and you never watch them back anyway. So why bother?
That said, if you want to bother, I generally have no problem with that. But apparently, other people do, so that’s where Yondr comes in.

Yondr has a simple purpose: to show people how powerful a moment can be when we aren’t focused on documenting or broadcasting it.

Put your phone in a lockable bag when you go into the venue, it automatically locks when you’re actually in the venue, unlocks when you leave the concert area. Seriously. This is already a thing at some UK gigs. Who knew? I’m amazed.

Ticket touts are a problem worldwide, and there are already means to get around them. I’ve never felt the need to use one. Either I get lucky with getting tickets to an event, or I manage without going to that event. But while there are still people who are willing to pay anything to get into a concert or event, there will always be ticket touts. And because of ticket touts, and the rules around reselling tickets, I’m going to have to very careful when I sell my Cape Town 7s tickets in the very near future.

People talking at concerts. My biggest of all big pet hates. I do not understand why people go to concerts if they just want to talk.

…this is probably one of the hardest gripes to propose a solution for. Though we did like the suggestion of listener Richard Leach, for: “A soundproofed enclosure where people who want to talk loudly for the whole three hours can go.”

Or how about not a soundproofed enclosure, but just somewhere else for them to go and talk. Because there are already other places for that: pubs, parks, , the beach; in fact, basically almost everywhere except concert venues. And you’ve just paid n hundred Rand for the tickets? Why? No. If you want a long conversation about your economics textbooks, do it somewhere else, you stupid, selfish, ignorant little pricks.

Admin fees. To be fair, I probably should have a problem with paying R15 to buy my tickets for a concert. But actually, I don’t. It’s not a massive amount of money when you look at That probably says something about me, but with 5 other potential gig gripes for me to worry about, why would I add a sixth when I don’t really care?

Cloakrooms. No-one uses cloakrooms anymore, do they? Don’t take a bag to a gig. Thanks to ISIS, you can’t really anymore anyway. Travel light. Wear layers. I dunno… make a plan.

Access. Ja. Again, I’m fortunate to be unaffected by this one, but it’s something that should be looked at. The disabled seating areas at sports stadiums and concerts is generally pretty awful. But it’s difficult to know how to address this correctly without stats and money and things. And I’m really not trying to pass the buck, but it’s not my job. However someone needs to do it.

So there you have it. People’s Top Six Gig Gripes. And for me, there’s basically one. I mention it every time I go to a concert because it happens every time I go to a concert and it’s ruined by wankers talking through the best bits. But I’ve never really mentioned the other five, so I reckon I’m pretty easy going generally. All of which points to the fact that people talking through concerts irritates even the most mild-mannered individuals.