Just for the sake of completeness, and somewhat belatedly (I’ve been busy doing life), a quick update on the state of the hippo which got stranded in a swimming pool in Nylstroom.
Actually, the title of the post may have rather given the game away already.

The hippo is dead.

“Solly” was doomed as soon as people got all soppy over his plight and gave him a name, thus immediately humanising him and making it far more emotionally draining for all concerned when he popped his clogs. Questions have to be asked as to whether he would have survived if the vet hired to tranquilise him hadn’t arrived four hours late, but they won’t be asked, because we have far more important questions to be asked.

Who on earth is going to go and stay at the Monate Game Lodge near Modimolle, when their pool looks like this? 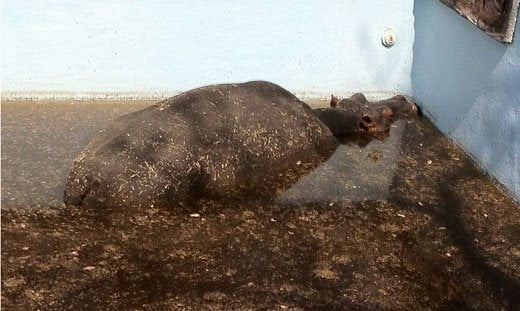 (and I’m not talking about the 1 ton of Hippopotamus amphibius therein.)

Fortunately, due to draconian export legislation, we have a surfeit of swimming pool cleaning apparatus here in South Africa and I’m quite sure they will clean all that hippo crap out in no time at all.