Sugar
[De de der dum dum dum]
Ah, Honey Honey
You are my DEATH SENTENCE!
And you got me wanting you.

I’m not sure just how socially acceptable it is to call anyone “Sugar” nowadays. You’d probably be pounced on by all sorts of PC types for all sorts of things. But they may have a point. While “Sugar” used to be entirely reasonable to use as a term of endearment or a even as a compliment, suggesting femininity and sweetness, these days, SUGAR IS EVIL.

I know this because Rogue “Scientist” Timothy Noakes says so:

“Once you tip over the precipice, you’re gone,” exercise science professor Noakes told Men’s Health magazine.
“You are going to die of diabetes. And if you want that, keep eating sugars and carbohydrates, and get fat. That’s where you are going.”

And if you don’t want that, surprisingly, you can buy his book.
Even allowing for the hyperbole and pisspoor journalism which characterises popular health magazines, “You are going to die of diabetes” is a pretty bold statement. Even for a scientist who famously and bravely admitted, “I’ve made a mistake” on carbohydrates.

Actually Tim, your academic record suggests that you repeatedly “made mistakes” from 1976 until 2012; “mistakes” which were peer-reviewed and published. But now you’ve seen the light and we should believe everything you say, because… you… say so. Who’s to say that in 35 years (assuming we’re not all dead from diabetes or heart disease or cancer or alien invasion), you have another book to sell and suddenly realise that you’ve “made a mistake”?
And before you go telling me about all the positive scientific evidence for LCHF, I’d just like to say that there’s a wealth of other scientific papers out there telling us quite the opposite, many of them with Tim’s name at the top.
I’m not saying that he can’t change his mind – of course he can change his mind – I’m just saying that I’m not sure I would trust anyone who had been repeatedly incorrect for 35 years before changing his mind.

Anyway, all this preamble is really just so I can pop this here: 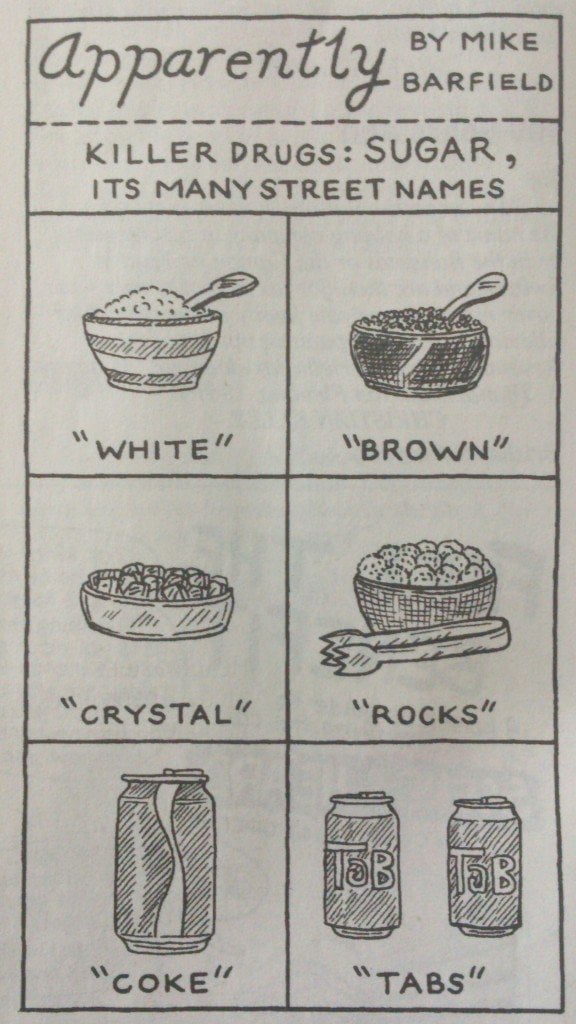 …which I thought was super amusing and is clear evidence that – given the huge number of slang terms and nicknames for illicit drugs – you can demonise any household food product. Why, only the other day, I was tempted by some… [lowers voice, looks around furtively] …”cheese”.

It turns out that that was actually cheese though.
Which should at least make Tim happy.