Yet that’s seemingly been the sole aim of Helen Zille and the Democratic Alliance over the past, final week of campaigning before the election. And it’s a tactic which has drawn criticism from many quarters for it’s negativity and single-minded determination to go after JZ, while there are plenty of other major issues and challenges which need addressing in this election. 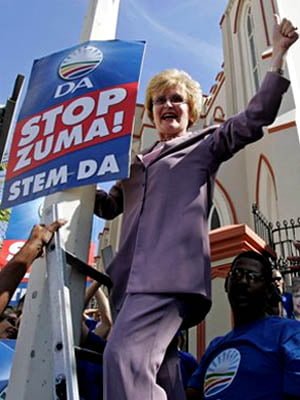 Zille and her grand plan.

Sadly, it’s also a campaign which, as the international community sits up and takes notice in the run up to the election, has been reported around the world, with Zille’s scaremongering tactics dragging the country’s name further through the mud. See the New York Times’ report and the BBC’s South Africa ‘doomed under Zuma’. The latter is worth a look if only for the picture of Zille’s cabaret act – the article itself makes depressing reading.

This evening on the way home from a hard day’s science, I listened into John Maytham’s show on 567 Cape Talk. Maytham described himself as “revolted” by the Stop Zuma campaign and stated that he had been put off voting for the DA.
Then, in a shock move for me, I found myself agreeing with Maytham’s guest Jonathan Shapiro – the cartoonist otherwise known as Zapiro. But what surprised me more was that Shapiro, who was apparently previously an ANC voter but who will not be voting for them this time because of Zuma’s reputation, was also disgusted by the DA’s recent campaign, describing it as a “terrible mistake”. Strong words indeed from a man who has himself been accused of harbouring a vendetta against Msholozi. While he said he was still undecided about who he was going to vote for, the DA had joined the ANC on his list of ‘definitely nots’.

I don’t understand why the DA has suddenly taken this route. They are absolutely capable of winning the Western Cape in this next election, which was their stated aim. But whatever strategist persuaded them that moving away from campaigning on any other issue and concentrating on the futile task of “stopping” Jacob Zuma – whatever that means, anyway – has done them a great disservice. As far as I can see, having spoken to people, read newspapers and checked in on the local media, this negative campaigning has turned the voters away from the DA, Maytham and Shapiro being the latest examples of this phenomenon. If they had nothing to fight for, that wouldn’t be a big issue, but with the Western Cape as tight as it is, I can’t help but wonder – have Zille and the DA shot themselves in their collective feet by solely (no pun intended) going after Zuma?