But xenophobic violence continued today, especially in the townships around Johannesburg. The police (SAPS) who had previously warned of a growing undercurrent of xenophobic unrest have accused criminal elements of hijacking the issues which have caused these attacks and worsening the situation. And while the police responded to the trouble with rubber bullets and tear gas, they have regularly come under fire from live ammunition. 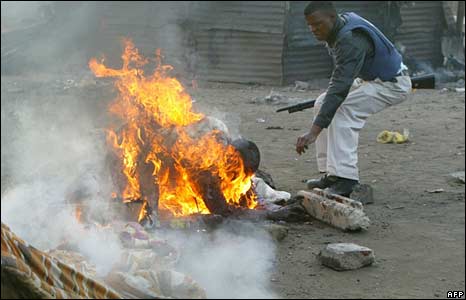 Section 201 of South Africa’s Constitution allows for the army to be called in by the President to assist the SAPS:

Only the President, as head of the national executive, may authorise the employment of the defence force ­… in co-operation with the police service;

I would suggest that the time for that decision has already passed. With every news bulletin, we are hearing of more problems, more casualties, more deaths. However, whether Mbeki will (for once?) act decisively in this situation remains to be seen.

Now there is the distinct possibility that the situation will spread to other cities across SA, including Cape Town:

About 30 Somali shopkeepers trading and living in Du Noon have received warning letters telling them to leave the area, fuelling fears that xenophobic attacks occurring in Johannesburg could spread to Cape Town.

It seems likely that this situation will certainly get worse before it gets better. In fact, listening to the news on the radio, it’s getting worse even as I write this. Once again, huge negative publicity for South Africa and huge issues for the 3-5 million (depending whose figures you believe) immigrants in this country at the moment. And what choice for the Zimbabwean immigrants particularly – starvation in their own country or the threat of violence in this new home.

I’m sorry. I don’t have any answers. Even deploying the army in these hotspots will only see the trouble move elsewhere and does nothing to cure the underlying issues which have led to this situation.
“Send them back where they came from” suggests to these people that violence is the answer. It surely isn’t.
And me? An immigrant here myself – “taking their jobs”.  I’m just glad that I am where I am and not facing what those less fortunate than me are facing right now.

More on this issue will surely follow over the next few days on here as the situation develops. Don’t miss out.