Time to retrain our brains people. Just as touch-typing has become something of a sport, with lightning fast texting and constant keyboard contact, a new app is looking to change the paradigm. The Slice Keyboard app is a new on-screen rotary board that redefines typing by creating new finger movements.
The idea is the typer will always have certain fingers on the touchscreen of their device. Depending on which circle the users’ fingers are on, a rotary wheel appears with certain characters that allow the user to quickly access via simple taps.

The question is, can we handle a change in such a fundamental and important means of interaction with our devices? 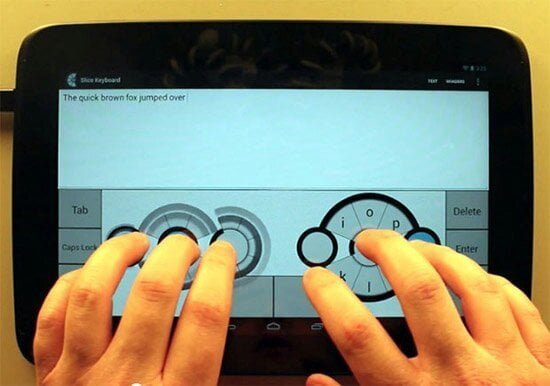 I already use Swype, which makes my typing lightning fast. Even that, using a standard Qwerty keyboard, took some getting used to. But I’ll give this a go and report back. Better still, of course, would have been to actually use Slice to write this post. But ain’t nobody got time for that.