This, via Whatsapp late last night.
Usually when Mrs 6000’s married female friends message me late in the evening, I can’t share the contents.

This one is different: 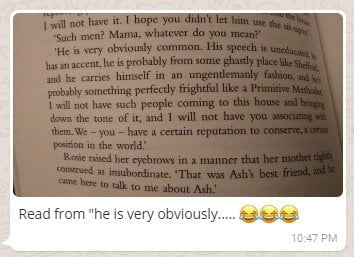 Struggling with the teeny text? Allow me to assist.

“He is very obviously common. His speech is uneducated, he has an accent, he is probably from some ghastly place like Sheffield, and he carries himself in an ungentlemanly fashion, and he’s probably something perfectly frightful like a Primitive Methodist. I will not have such people coming to this house and bringing down the tone of it, and I will not have you associating with them. We – you – have a certain reputation to conserve, a certain position in the world.”

Nice. Thanks for that, Louis de Bernières.

I’m not one to get into silly rows over heritage and stuff, but Wikipedia tells me that you were born in 1950s South East London and that’s hardly a shining example of loveliness, now is it? Additionally, I have no huge problem with you slating my perceived lack of education, my timbre or my general appearance based solely upon the city of my birth, but I draw the line very firmly some distance in advance of your “Primitive Methodist” slur.

That, sir, was below the belt.

I fear that this may only be the tip of the iceberg when it comes to unfounded defamation and character assassination of us fine, upstanding individuals from the Steel City, so if you have any other examples, please feel free to email me so that I can perhaps construct some sort of compendium of examples of this sort of libellous, pseudoxenophobic prejudice.

One thought on “Sheffield Paragraph”