After yesterday’s shark attack in Fishhoek, I listened to a woman who rang into a local radio station saying that she was confused about the flag system used on the beaches of False Bay to warn of shark activity and how she had to look at the signs each time she went to the beach.
“Red doesn’t mean danger,” she complained, amply demonstrating her confusion for the listeners.

It seems that some (re)education is required.
So what exactly do the four flags used by the Shark Spotters programme mean? 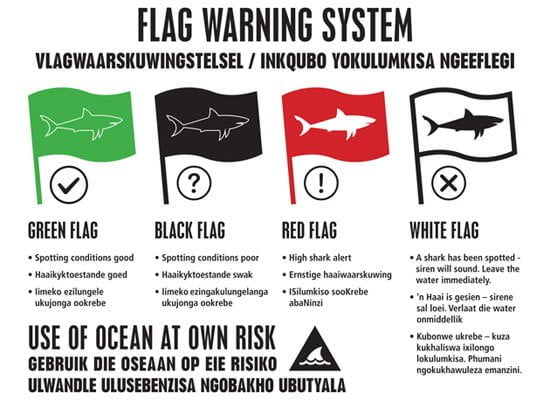 Green flag: We can see that there are no sharks around.
Black flag:  We can’t see if there are any sharks around or not.
Red flag: We have recently (ie. within the last 2 hours) spotted a shark.
White flag (and SIREN SOUNDED *hint hint*): There is a shark. Leave the water immediately.

It’s not so difficult really, is it? Especially since this helpful explanation is posted on and around all the local beaches: As it says on the signs above (and as common sense would surely dictate) – swimming in the ocean is at your own risk. But why not lessen that risk by actually listening to these guys when they tell you to get out (or not to get in)?