It seems that they weren’t the ones who won the World Cup last night and they think it’s the referee’s fault.
I don’t agree – they were rubbish and they deserved to lose – but let’s let them have their say.

We sat there in the dressing room and only talked about some of the refereeing decisions.
There were a few things which were hard to take, but there is no point talking about them now.

I can see why Robben was incensed. He made a HUGE error seven minutes from the end of normal time by inexplicably staying on his feet when Carles Puyol appeared to hold him back.
Robben’s decision was inexplicable for two reasons: firstly, that if he had gone down, Puyol would have been sent off, but moreover secondly, that he actually appeared to know how to stay on his feet.
Quite why it took him until 7 minutes before the end of the final game of the tournament to realise he had this ability is another question completely. But football365 agrees with me:

Had Robben gone to ground on the edge of the box when Puyol reached an arm out, Holland could have had a free-kick and Spain could have been reduced to ten. As it was the status quo was retained, and Robben’s complaints deservedly fell on deaf ears. The man goes over so easily, how does he expect to receive decisions when he stays on his feet? Surely a referee can only assume the challenge was incredibly light.
He made the kind of protest that is only made because things didn’t go his way. Imagine if Howard Webb did stop the play before he reached Casillas. He’d have been furious to have been stopped in his tracks. If you let the play go, allowing the advantage, you can’t then come back and send Puyol off. The advantage was allowed, Robben didn’t capitalise. End of story.

But anyway, as Arjen correctly states, there’s no point talking about it now. Although he is.
And so am I. And so is Arjen’s mate, Nigel.

Yep, Dutch number 8 Nigel de Jong was also unhappy, because he felt that the major calls went the Spaniards’ way:

There were a few curious decisions in the game, but that is football.
Football is football, maybe I am a little old school, but I remember the games back in the days when there were worse fouls which never even got booked.

Hang on, Nigel – are you saying worse fouls than this? [youtube] 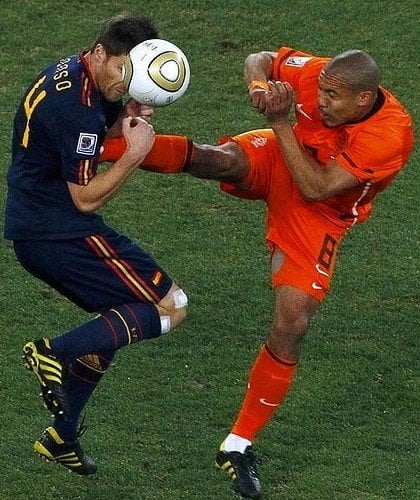 Because if you are, I’m struggling to recall at what point in the “old school” of football this sort of thing went unpunished. Perhaps you’re getting it confused with the old school of Tae Kwon Do, in which “one point is scored for an effective attack to the trunk“. Or perhaps you’re just looking for a scapegoat.
Let’s bring in the  impartial football365 again:

Dutch fans who feel they have been hard done by should hold their tongues, frankly. I thought Howard Webb’s biggest two mistakes were not sending off players bedecked in orange. Nigel de Jong’s almost neck high, straight-legged assault on Xabi Alonso was nothing short of a red card. There is dangerous play, and there are tackles which you know when you commit them are capable of seriously injuring someone. This was in the latter category, and should have resulted in Holland being down to ten a long, long time before the game’s conclusion.

But if Webb sends him off then the Dutch are down to 10 men for most of the game and the match as a spectacle is ruined.
And who gets the blame for that? Well, Howard Webb, of course. It’s a classic no-win situation. Which Spain won.

The Dutch certainly didn’t hold back with their challenges and they can have no complaints with the number of yellow cards (and the one red) they received. But of course, in any big game, emotions run high and games don’t come any bigger than this. And when your own frailties are exposed and you let yourselves, your country and your fans down, then you’re bound to say some things you might regret later.
Blaming the referee conveniently deflects the attention away from a poor Dutch effort and attempts to trivialise their approach to the game, which was nothing short of thuggish. World Cup finals are rarely pretty – there’s too much at stake (compare and contrast the free flowing football of the “no pressure” third place game the previous evening) – but this one was at least full of incident.

That the Oranje caused most of that incident and then tried to blame it all away on the referee is a disgrace.

UPDATE: Not overly dramatic from Kevin McCarra in the Guardian.

Holland were already being rebuked prior to the final but these events were on a wholly different scale and Fifa should take additional action considering the harm done to the culmination of a tournament that means so much around the globe.
After a World Cup final of so toxic a nature the stadium is in need of decontamination more than the regular clean-up.

And some good stuff from Richard Williams in the same place.

UPDATE 2: And the more I read that football365 post, the better it gets.