Racial quotas in South African sport have been a bone of contention as long as I can recall, and I’ve got a South African memory of almost 12 years now. I think it came in when I was denied my rightful place in the South African national football team, simply on the grounds that I was white*.

Many people have many different views on quotas in sport, and expressing them at any chosen volume will still result in absolutely nothing being sorted out any time soon. As a result, I’m not about to try and tackle any of these issues in this blog post, and I would welcome you to not tackle any of them in the comments section below either.
Thanks in advance.

One organisation that has stepped up to the plate in expressing their views on the quota system, specifically in regard to the Springbok squad heading to the Rugby World Cup (RWC) in England later this month is the Vryheidsfront Plus (VF+), an Afrikaans political party here in SA.

They’re not happy with the “political interference” (quota system) in the selection of the SA squad in that:

The Minister of Sport and Recreation is proposing that in future the national and all provincial rugby teams must reflect the national demographics of young men (please see the attached media statement from the Minister). This means that 84% of each rugby team must be black and only 16% of every team will consist of coloured, Indian and white players. This in means in practice that less than 3 positions in every team will be available for minorities.

This is part 1 of a… document thing that they have submitted (for some reason) to the:

You can read the whole thing here. The introduction is in Afrikaans, but as Stellenbosch University have recently discovered, not everyone speaks Afrikaans, so they have in English the actual document writted. (And yes, “die Britse hoë kommissaris” is the Afrikaans for British High Commissioner. Not for any other sort of British Commissioner.)

The political interference in the selection of the national rugby team may mean that South-Africa’s strongest available team will not be competing and/or taking part in the Rugby World-Cup Tournament for 2015.

Those hyphens can like to be theirs, by the way.
Alrighty, so having decided that the Springbok squad which is competing and/or taking part (??) in the RWC isn’t the the strongest that it could be, it naturally follows that:

As a result, the ultimate winner of the tournament may not be able to claim that they are the world champion team as South Africa would have stood a reasonable chance of winning the tournament with a team selected on merit.

Oooohkay. If you say so.
*cough* 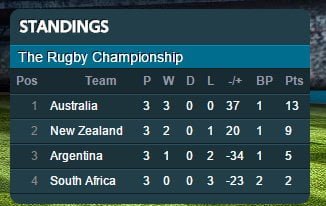 Ignoring that, the VF+ furthermore add:

It goes without saying that the quota issue itself has a very negative impact on the individual players and the team, and the government interference causes divisions in South African society on a racial basis.

So, you guys over at the British High Commission, the British Rugby-Unions and the British Government need to consider the gravitas of this situation, because:

The political impairment of a potential winner may place the credibility of the whole tournament in jeopardy.

Yeah. It was political interference what did for them. (Although, yes, the Sports Minister is a bit of a twat.)
If it wasn’t for this political interference and the very negative impact on the individual players and the team, this would have been a walk in die bos for the Springboks. The whole tournament is a jeopardy. The whole thing. The only way to grant the competition any sort of legitimacy would be in South Africa won it.
But as the VF+ have already insinuated, that’s not going to happen. It all smacks of a Afrikaner episode of Scooby Doo:

No, but really. Quite what the VF+ expect the British High Commissioner, the British Rugby-Unions and the British Government to do about this alleged political interference and its alleged effect on the Bok squad and the whole Rugby World Cup is rather beyond me. It almost seems like grandstanding in order to make a cheap, ineffectual and meritless political point. But… surely not.

Interestingly, while we’re on the subject (which we are), the Agency for a New Agenda party are also unhappy with Minister Fikile’s quota system. They think it’s not good enough, and instead of writing a document thing, they have taken to the courts:

ANA president Edward Mahlomola Mokhoanatse will be in the North Gauteng High Court seeking an urgent order to compel Saru and sports department officials to surrender their passports so they cannot travel. It also wants the court to order “the executive” to establish a “judicial commission of inquiry into the lack of transformation in South African rugby”.

Me? I’ll be supporting England for the World Cup – being English and all. Of course, I recognise that if they win after  competing and/or taking part, then I won’t be able to claim that they are they are the world champion team, because Pieter Mulder says not, but it would just be nice to see them beat what teams were there.
Maybe they could make the trophy out of plastic, or something – just to signify that it doesn’t really count? That’s actully a pretty good idea. I’ll write to the British High Commissioner, the British Rugby-Unions and the British Government and let them know.