It’s been a while since I’ve included anything from friend-of-the-blog BrianMicklethwait.com. That’s not to say that I’m not a daily visitor to his haunt – I am. But he is him and I are me, and thus it’s only when the paths of our mental scribblings cross that I choose to share his stuff with you. Sometimes that happens three times a week. Sometimes once in three months. I don’t keep count or have a quota to fulfill: when it happens, it happens.

Good news, reader: it’s happening right now with this image of a bit of wall of the 5 star boutique Milestone Hotel in Kensington: 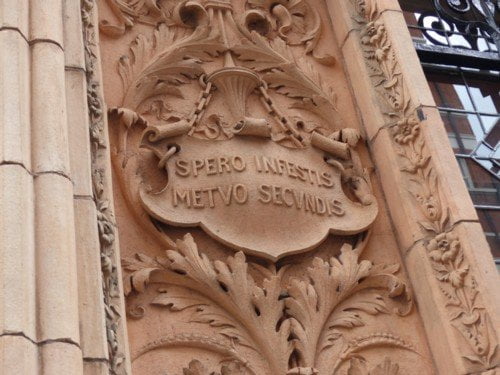 Which, according to several (or more) websites, translates as:

I hope in adversity, I fear in prosperity.

I am hopeful in times of danger; I am fearful when things are going well.

Which seems both a positive outlook, but also a bit pessimistic at the same time. So overall, pretty neutral and perhaps even rather sensible, then?

Given that generally, we live our lives not in a constant state of one extreme or another, but mostly somewhere down the middle, this 3D Latin thing will only kick in occasionally, but when it does, it will surely temper our acute and foolish emotions and restore some sort of natural order to proceedings.