I’m not talking about lions, hippos, rhinos or elephants here – you look at them and you think DANGER! Teeths, tusks, horns, speed, weight, bulk. DANGER!
But tall isn’t scary. When you look at a giraffe, you just see bewilderingly puny looking legs and neck. Giraffes don’t look dangerous. They look like one of those string and wood toys that you push the base on and they collapse. You let giraffes play with your kids’ cuddly toys: 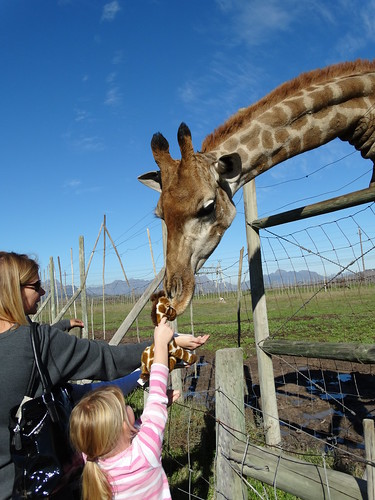 No. Giraffes aren’t dangerous. Or are they? Because here’s what was waiting for me on the pisspoor TimesLive site this morning:

Cyclist trampled to death by giraffe

The giraffe probably got irritated by some typically arrogant RLJ’ing behaviour.

A Sunday afternoon cycle ride for Braan Bosse of Nigel, on the Far East Rand, ended in his death when he was attacked by a giraffe at the Thaba Monata Game Lodge, in Bela Bela, Limpopo.
Lodge owner Marily Abatemarco believes Bosse, 46, was trampled to death.

Rather unusual, though, right? I thought so too.
But then, somewhere deep in my memory, I found this:

Seventy-year-old Schalk Hagen died without telling anyone exactly what happened to him. Now the prime suspect in his death is a giraffe.

I was quite ready to cower away from the lions and the elephants this weekend. Now it seems that I have to hide from the bloody giraffes as well. Seriously?
You don’t get this sort of danger in the UK – sure, you might come across a vaguely irritated badger or a mildly disgruntled fox, but they’re not going to smash your skull in, eat you or jump up and down all over your rapidly spatchcocked corpse just because they’re anxious to be seen to be living up to their “wildlife” moniker. I didn’t move here for this – if I’d wanted constant animal-related danger, I would have chosen Australia. (Spoiler: No, I wouldn’t – it’s full of Australians.)

Anyway, my new plan is to stay in the short scrub, where there is limited danger of unforeseen giraffe attack (aside, of course, from the extremely sneaky limbo giraffe) (but fortunately they’re pretty rare in the Western Cape).