Here’s an image of the A-frame chalkboard outside a popular ice cream parlour in Claremont, Cape Town. 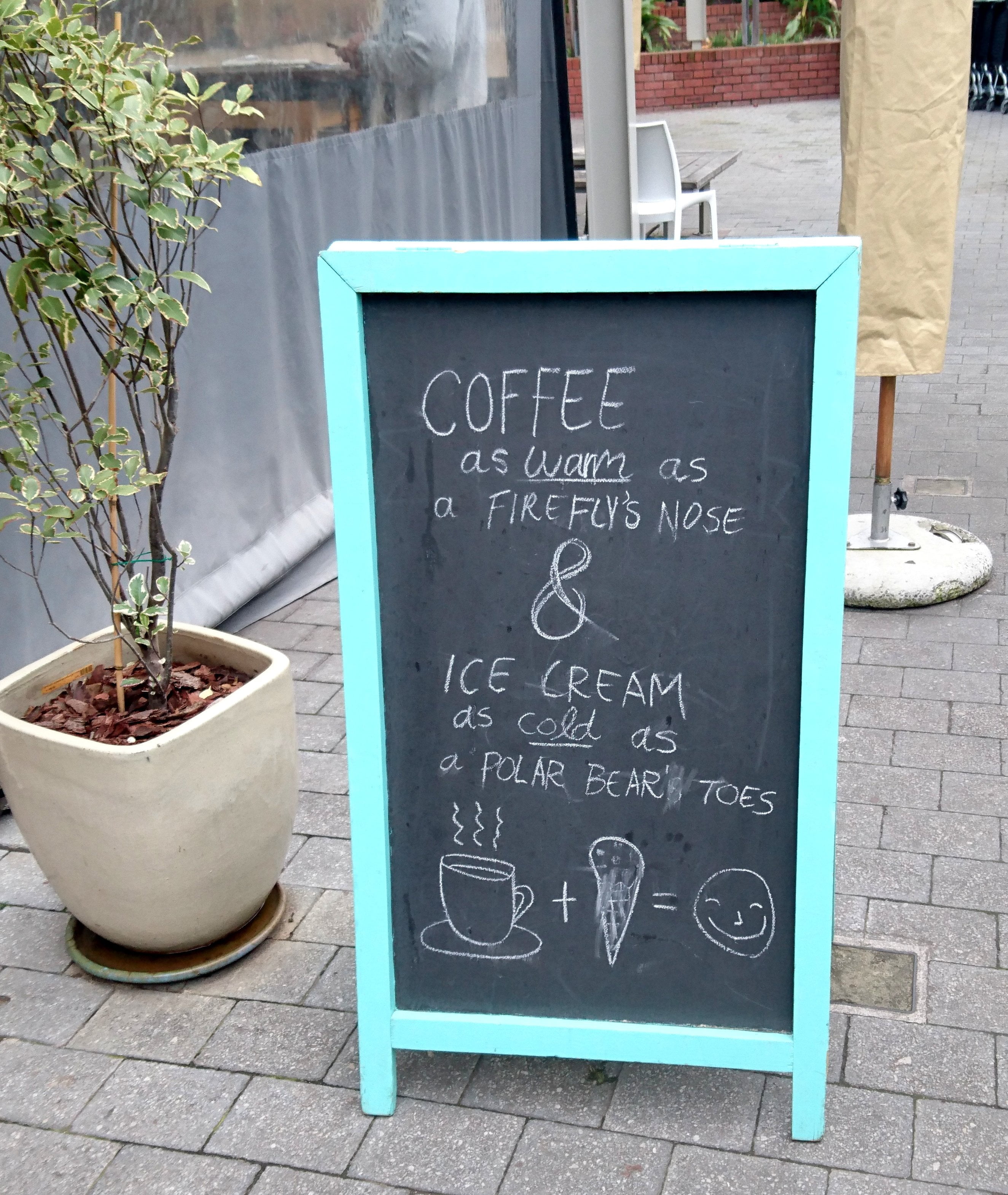 Ja. As you may have guessed, I have a few issues with it.

Let’s break it down into two handy statements, shall we?

Coffee as warm as a firefly’s nose.

Firefly is the common name for the Lampyridae family of insects in the beetle order Coleoptera. They’re called fireflies (or lightning bugs) because they use bioluminescence to attract mates at twilight:

The enzyme luciferase acts on the luciferin, in the presence of magnesium ions, ATP and oxygen to produce light.

All of which is biologically amazing, visually incredible and weirdly somehow rather romantic. But the reaction doesn’t yield any significant heat, and it certainly doesn’t happen in their noses (they don’t even have noses).

Fireflies produce a “cold light”, with no infrared or ultraviolet frequencies. This chemically produced light from the lower abdomen may be yellow, green, or pale red.

And then that second statement:

Ice cream as cold as a polar bear’s toes.

I have some bad news for patrons of this particular ice cream parlour. Ice cream is best served at around -12ºC, while polar bears’ toes (such as they even exist) are maintained at a decent 37ºC, just like the rest of their body.

Polar bears are mammals, brilliantly adapted to their habitat in the Arctic. They have blubber and thick, air-filled fur, which allows them to survive in the sub-zero temperatures in the polar region. Their paws are no exception to this. If they were not kept at 37ºC, the polar bear would get frostbite, which without prompt surgical and antibiotic treatment, would likely develop into gangrene and septicaemia, and inevitable death.

There’s also an additional problem. Polar bears’ toes are smelly. They stink. This is due to prominent sweat glands on their paws, and the fact that that the bears use their feet to tread urine into the ground and ice. It’s simple scent communication, but it’s really not something that I want my ice cream to be associated with.

So. Nice rhyme, but wholly inaccurate. Very poor.
Let’s sort that it for them:

Coffee as warm as the current ambient conditions at The Creamery.
Ice cream served at body temperature, with a slight smell of sweat and wee.

That kinda works, and I bet that brings the customers flocking in.