BIG NEWS from Liverpool: the most pathetic serving of fish and chips ever has been served there. And it’s made it as far as (one of) the overly desperate national newspapers.

Furious diner Tina Doherty was stunned when her order arrived and was made up of just SIX chips.

No wonder she was furious. That’s a pathetic number of chips.

Tina had gone out for dinner with her husband, Kevin, and two friends to the Jolly Miller in Liverpool after a night out bowling.

The pals had ordered ordered their main meals – two hunter’s chickens and two portions of fish and chips – which they chose off the two for £10 menu.

It sounds like the evening had got off to a great start. Nothing to see here, folks.
And Tina and Kevin and their friends were looking forward to rounding it off with some decent food at the pub on the way home when disaster struck.

However when the server handed Tina, 53, her meal she couldn’t quite believe she had been given just SIX CHIPS with her fish and peas.

No wonder she was furious. That’s a pathetic number of chips. 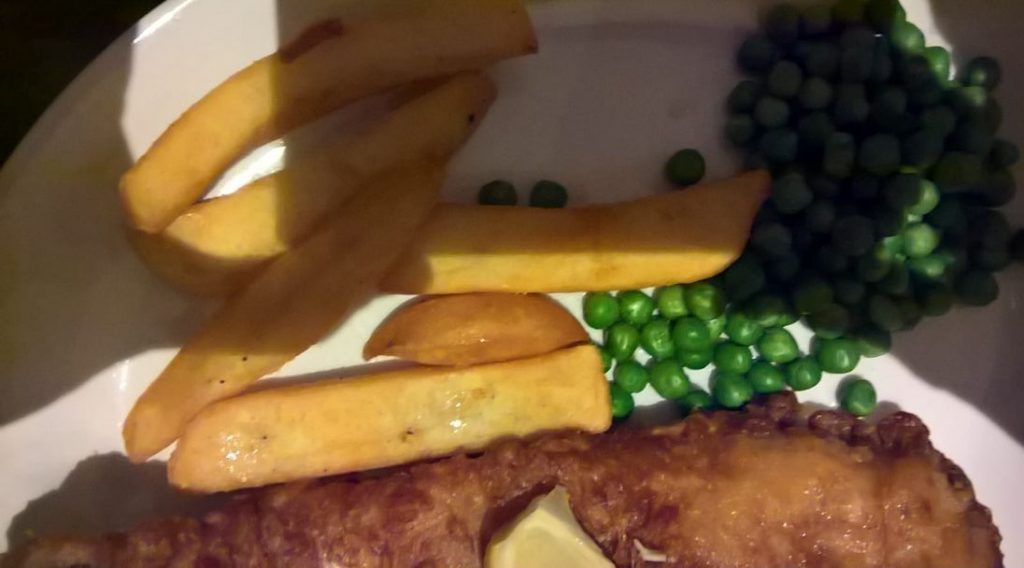 (I may have mentioned this before.)

Care worker Tina, from Aintree, sent a picture of the pitiful portion to her husband who told her she should complain.

Well, he would. He’s from Liverpool.
But wait. What?
Why didn’t he just look at what was on a table in front of him?

Husband Kevin, 60, said: “She sent the picture on Whatsapp and I must admit I laughed. I was at home with our son and daughter and we were just sitting down to our man-sized portions of curried prawns, rice and real homemade chips.”

Oh. Were you now, Kevin? And where else were your son and daughter? Were they also at the Jolly Miller with their mum? Or perhaps they were in another local establishment which also serves miniscule portions?
How were you in two places at once, Kevin? Are you a twin? Mind you, this story suggests that if you are, then you are called Kevin and Kevin and that’s going to get confusing from a very early age. And are you both her husband? I’m not sure that’s 100% legal. Even on Merseyside. And we all know what they’re like there.

Kevin (the one at home) (or actually maybe the other one) (I really have no idea which one is talking anymore) continues:

I don’t know how anyone could justify or explain that as a portion of chips.

Justify or explain? Rice and real homemade chips? Kevin at the pub and Kevin at home?
There’s something very duplicitous and tautological about you and your mysterious ways, Kevins. And he (they) goes (go) on:

It looks like a toddler’s meal and even they would be able to polish off more than five chips.

Well that’s ok, isn’t it, lads? Because there were six chips. I’m happy to admit that it’s a pathetic number of chips. I already have, twice (once for each of you). But it’s still more than five chips.
Any other chip-based comparisons you’d like to make?

You wouldn’t even have enough to put on a butty with that portion.

No, Kevins. You wouldn’t. Are we done now, because I have other stuff I need to get d…

Kevin, who works for Jaguar Land Rover, also joked that maybe the Jolly Miller was “aware of the pending interest rate rise” the day after the meal was served on Wednesday – so cut its portions down.

Actually, just shut up now, Kevins, you pointless, double starch-consuming, potato-portion calculating, conspiracy-theorising, crap joke-making waste of a Scouse doppelganger.
I’ve had enough of you, you, your wife and this stupid story now.

More tomorrow. Not including pathetic chips or anyone called Kevin. Or Kevin.