Everyone makes mistakes. It’s an innate skill, as The Human League told us, back in ’86:

Multinational cellphone behemoth Vodacom made a mistake with their billing run last month, resulting in some (or more) customers being billed twice for the same month. Oops. They told me about it via SMS last Friday: 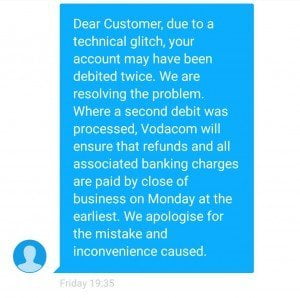 Not a great start to the year. But now here’s the thing. It’s not the mistake making that is the issue – because everyone makes mistakes, we’ve covered that – it’s how you go about sorting out that mistake.

I have to say that Vodacom sorted out their mistake very quickly, by saying sorry, keeping me informed, crediting me with the missing amount that was debited twice and then telling me when they’d done it. Which was yesterday, right on time: 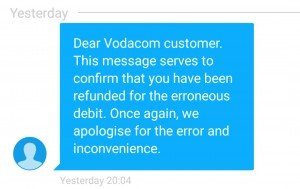 They’ll lose marks heavily if they do it again, because one important part of reacting to a mistake and sorting it out is learning from it so you don’t make the same mistake again.

But, given that these things can – and do – and did – happen, I was hugely impressed with their response.
Well done.

2 thoughts on “On Making Mistakes…”