Giraffes have featured on this blog before – mainly in news stories of incidents where they have attacked humans and killed humans (well, a cyclist, but still), but also in happier circumstances.

Oh, and then in the way that they have died. I’m talking about the dangers of low bridges and bush runways.

If only there was a page on the internet documenting Unusual Giraffe Deaths. Then we could all… I’m sorry… What?… Seriously?… Well, that’s just great. Let’s go for it. Perfect.

Of course, there is a page on the internet documenting Unusual Giraffe Deaths – here it is. It deals with the age old issue of lightning strikes:

Between 1996 and 1999, the Rhino and Lion Reserve near Krugersdorp, South Africa, had two of its three giraffes killed by lightning – the third animal (a juvenile) was also struck but survived. Betsy the giraffe was killed by lightning at Walt Disney World in Florida in 2003 (in front of lots of witnesses).

And then there is just plain clumsiness:

Herbivores sometimes die after getting their necks caught in branches. This is a hazard for antlered deer but there are also cases where unantlered deer, horses and other animals have died this way too. And it’s happened, at least once, to a giraffe. In this case, the unfortunate animal slipped while feeding and got its neck caught in a forked branch. Its carcass then remained there, suspended, until people pulled it down. 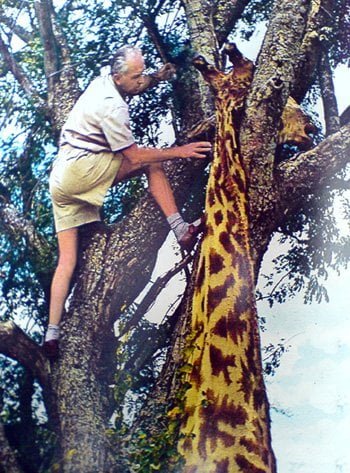 But giraffe-loving readers must recognise that this is a very unusual occurrence and is nothing to get hung up upon.

Can giraffes drown? Well, yes, as air-breathing mammals, it’s certainly technically possible but it would have to be a very deep river or lake to drown a giraffe. And anyway, can’t they swim, and don’t they float?

If only there was a scientific paper on the internet predicting the buoyancy, equilibrium and potential swimming ability of giraffes by computational analysis. Then we could all… I’m sorry… What?… Seriously?… Well, that’s just great. Let’s go for it. Perfect.

Of course, there is a scientific paper on the internet predicting the buoyancy, equilibrium and potential swimming ability of giraffes by computational analysis – here it is.

It’s not a perfect solution, because:

Giraffes are complicated objects, and modelling them digitally is fraught with difficulty.

Here’s an excellent synopsis of the paper. It asks all the right questions, like: Can giraffes float?

By rising the simulated water level around the giraffe model [as shown in the figure below], it was found that an adult giraffe would start to float at a water depth of about 2.8 m. It seems that the hindlimbs would leave the substrate before the forelimbs, raising the possibility that giraffes in deep water might be able to pole themselves along with their forelimbs alone.

Well, ok. But can giraffes swim?

Positioned in the water in an uncomfortable pose, afflicted with a relatively high mean density, suffering from substantially high frictional drag, and unable to raise and lower its neck and hence unable to adopt a synchronous gait, we conclude that giraffes would be very poor swimmers, and that it might be assumed that they would avoid this activity if at all possible.

And it’s at this point that it asks the most pertinent question of all:

Does this have any implications whatsoever for anything?

And again it’s a yes:

If giraffes do perform poorly in water – so much so that they avoid crossing large bodies of water should they need do – has this had any impact on their biogeography?

Unfortunately, we don’t really know enough to be sure whether these distributional limits actually have anything to do with the ability or inability of giraffes to cross water.

So overall, it’s actually a no. But Henderson & Naish still managed to get funding for their research, whereas I’m left struggling to find R350 to pay for test tubes for essential TB research. I’m not saying that they shouldn’t have been able to try to predict the buoyancy, equilibrium and potential swimming ability of giraffes by computational analysis, I’m just saying that test tubes are expensive and I could do with some research grant money as well.

But don’t let’s allow my personal bitterness on the vagaries of scientific funding derail the learning process that you’ve gone through in reading this post. So, in conclusion, (some) giraffes die in weird ways, most giraffes seem to be able to kind of float, giraffes are not great at swimming and that might (but probably didn’t) have an effect on where they are found in Africa these days.

Also, got any test tubes?