Since the latest software upgrade on my gorgeous Sony Xperia T, I have been treated to Google Now each time I use the search bar.
It’s a fairly amazing feature – it detects where I am, what’s around me and uses information I have searched for previously to work out what information might help me… well… now. It then displays that information on little ‘cards’ before I’ve even asked for it.
Now is wow.

Thus, I am treated to weather information, local restaurant reviews, even local news. It keeps me up to date with the latest on Sheffield United. It reads my next calendar appointment and offers directions. If I book a flight, it’ll keep me informed of delays, gate numbers, seat numbers and issue a digital boarding card. If I’m at a train station, details of the next trains to pass through will be displayed.

But I’m not often at train stations, so mainly, it just tells me how long it’s going to take for me to get home. 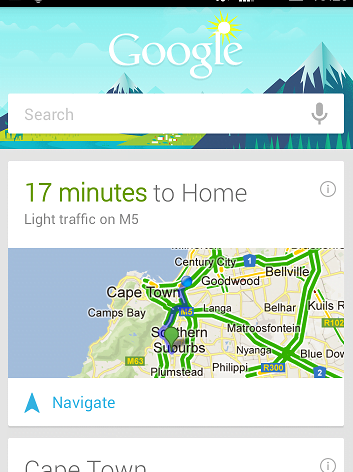 Yep. Wherever I go, once I have been stationary for about 5 minutes, Now thinks I’ve probably had enough already and tells me how long it’s going to take me to get home. Tap that little blue arrowhead and it’ll even talk me through it turn by turn. Right now, in the middle of the day, things are looking pretty cool for a quick trip back to Chez 6000. Sadly, I have plenty more to do here before I set off.

This could be seen as all somewhat sinister since I’ve never actually told my phone where I live. It has worked that out for itself. It also now knows where I work and warns me of traffic issues along the way as soon as I set off from home each morning. Again, I’ve never actually told it where I work either. The Sheffield United thing was also a bit of a surprise when it first popped up. It’s ever so clever.

And it’s actually rather comforting to constantly know how long it’s going to take me to get home.