Cape Town’s Two Oceans Aquarium has announced that they will have a new predator exhibit open by the end of the year. As regular visitors (and “Solemates”), our family is particularly delighted at this news. 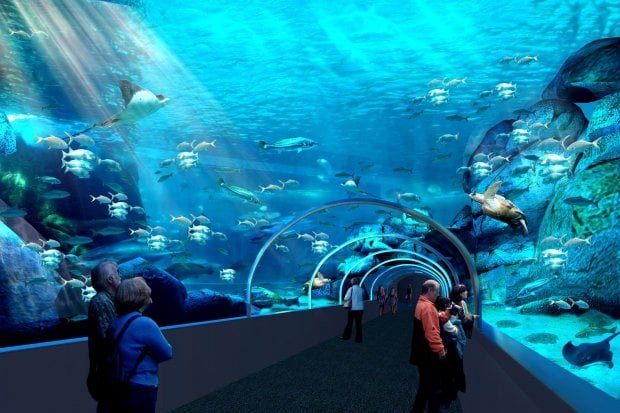 The new exhibit will hold 1.5 million litres of water and will feature – as demonstrated above – a 10 metre long tunnel, made from a single acrylic panel, meaning a seamless window into the six metre deep tank.

Some of the species will include spotted eagle rays, honeycomb rays, smooth hound and spotted gully sharks as well as Yoshi the loggerhead turtle and Cannelloni the green turtle. “I am particularly excited about the possibility of displaying skipjack and longfin tuna. In the early days of the Aquarium we displayed these fast-swimming fish, but the ragged-tooth sharks ate them! This time they will be safe as the raggies will be in a different display” says Technical Manager Mike de Maine.

We have similar woes – albeit on a slightly smaller scale – with our fishtank at home.

Building work is due to start by the end of this month and it’s hoped that the exhibit will be open by the end of the year.
Follow their progress on Facebook and Twitter.