No. Not me. Not specifically, anyway. Given the way that the data below are interpreted, I’ve been having a MMLC for possibly forever already. Nothing will change if I ever make it as far as 42. 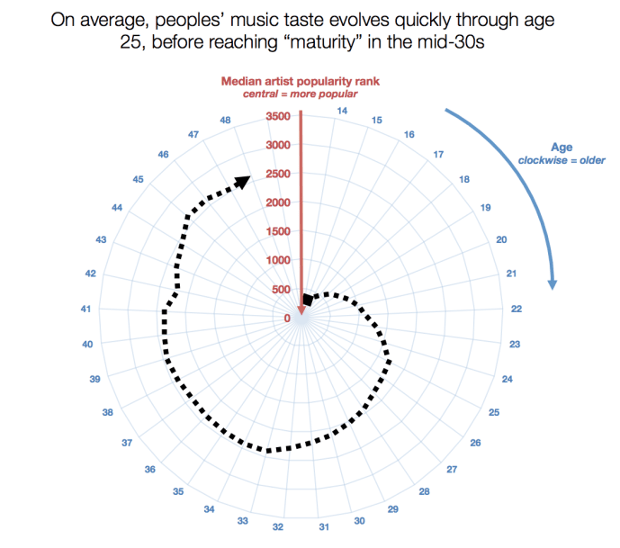 But this is very interesting for a number of different reasons. And before we go any further, the first of those reasons is that we can even look at this data. People have been buying and listening to popular music for decades, but while we’ve known what they’ve been buying (through the charts), we don’t actually know who’s  been buying it. Now, although these data are for a single music streaming service – just one of the many ways of accessing music these days – the ease and simplicity of correlating musical tastes with age, gender etc are still things that we never had before.

Secondly, I love the way that study author Ajay Kalia has devised a benchmark “Artist Popularity Rank” to measure stuff against. Any data analysis is utterly pointless unless you have a means of comparison. In this case, he used “artist hotttnesss” [sic] to see what was currently popular (Taylor Swift) and what was not (Natasha Bedingfield) which could then be cross-matched with who was listening to it.

To give you an idea of how popularity rank scales, as of January 2015:

Next up, I’m suspicious of data that looks this good. I mean, I’m not really suspicious, (but I am a bit). How perfect are those curves? (careful now). Look at it through the thirties: gorgeous. And then, yes, that dip – a definite kink – at 42:

Around age 42, music taste briefly curves back to the popular charts — a musical midlife crisis and attempt to harken back to our youth, perhaps?

Fortunately, looking at their spiralling graph, we’re all back onto the straight, narrow and distinctly uncool by the time we’re 45. Definitely something to look forward to.

There is that other point on there which I’m conveniently ignoring :

Sorry, fellow parents. We may be word-perfect on dozens of nursery rhymes and pre-school TV themes, but our pop savviness is in question. “Becoming a parent has an equivalent impact on your ‘music relevancy’ as ageing about four years,” writes Kalia.

That’s fine by me. I never claimed to be relevant anyway.

If you want more detail, here’s the full blog post on the study.