More beagle news? Sort of – but this is actually Beagle news, with a capital B. And that’s because it relates to the ship that Charles Darwin did his stuff on. Proper nouns FTW.

It’s now been 180 years since Darwin’s voyage to South America and those infamous Galapagos finches, and as history shows, he went there on the HMS Beagle, a ship so named because it chewed everything it got hold of and continually ran off with people’s socks. Darwin wasn’t actually meant to be looking at birds and animals: he was the ship’s geologist. The naturalist on board was, of course…?
Exactly, you have no idea because he didn’t come up with anything particularly spectacular in the field evolutionary theory. 1-0 to the Darwin bloke.
(For completeness, the ship’s naturalist was Robert McCormick, and he never ended up on the back of a ten quid note.)

Anyway, one of the ports of call on the voyage of the Beagle was Santiago in Chile (another was Cape Town, but that’s not important right now). And it’s there that Luis Peña, a Professor of Opthalmology, has created a 2,024 piece Lego replica of the HMS Beagle and he’s hoping that with enough support, Lego will actually produce and market an official Beagle kit. It’s simple and free to support his quest to get the most famous ship in the history of scientific exploration in the form of small, interlocking plastic blocks: you just click here. 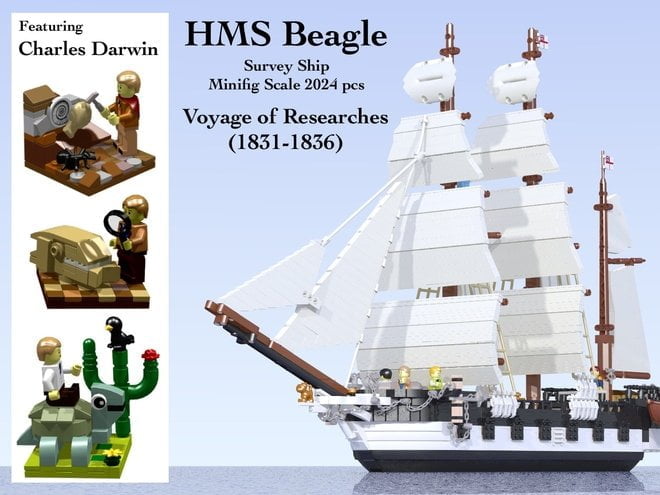 Luis’ project has already attracted 4800 “signatures”. If it gets to 10000, Lego will officially review it and consider making the kit. I think that’s quite cool.

You can read more about Luis Peña and his interest in Darwin and the Beagle here.