Summer’s here and with it the promise of lazy Sunday afternoons enjoying the Old Mutual Summer Sunset Concerts at Kirstenbosch.

Kicking off on 22nd November with South African legend, Johnny Clegg, the concerts run through to the end of March (and, I guess, the end of summer) with Watershed signing off for the season on the 28th.

The full line up:

Tickets for the first concert cost R95 for adults (yep – that’s what I thought too!) and are available from Kirstenbosch ticket office (021) 761 2866 or via http://www.webtickets.co.za/.

As usual, Kirstenbosch will be the place to be to rock out those Sunday afternoons (with the exception of 21st March, perhaps).

EDIT: While cross-checking details for the above piece (we’re damn thorough here at 6000 Towers), I saw this on the sanbi.org website: 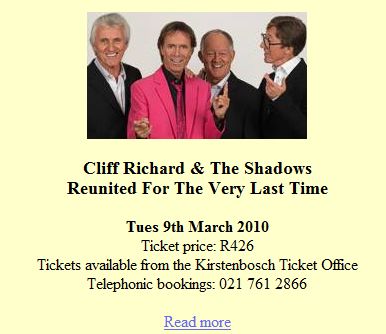 Is that a promise?? I hope so.