The words of Mr Beat Ettlin, 42 after he fought off a 40kg kangaroo which had broken into his house during the night.

The confused marsupial smashed its way into Beat Ettlin’s home in the Canberra suburb of Garran.
The 42-year-old told Sky News Online: “I just saw this black thing. I thought it was a lunatic ninja, an intruder. It just fell on top of us on the bed. A couple of seconds later I realised it was a kangaroo.”

As you would. The tail, the pouch, the bouncing motion and the lack of a sword. All dead giveaways. 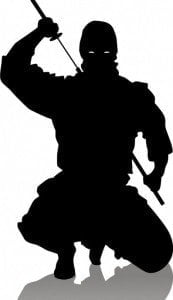 Full marks to Mr Ettlin, however, for not only making a presumptive identification of his would-be assailant, but also performing a remarkably quick psychiatric assessment.
I know – when something lands on your bed in the middle of the night, it’s sometimes hard to work out exactly what it is. I regularly have the same issue. Only yesterday evening, a moth fluttered down onto my arm while I was watching the Spanish footy. My first thought was also “lunatic ninja”, before I settled on the more reasonable Plutella xylostella. But not before I had battered him to death with my nunchucks.

So anyway, having gathered that her husband was dealing with a mentally unstable martial arts expert, Mrs Ettlin took the appropriate action:

“I just pulled the covers over our heads and screamed. It jumped on my shoulder, bounced across the bed and onto the bedside table. Can you imagine how close it was to my head?”

I don’t know – can we? Are you some sort of mutant?
If not, and it bounced on your shoulder, I’m going for about 6 inches, tops. It’s not that hard to imagine™.

But the similarity between kangaroos, lunatic ninjas and moths doesn’t end there:

Mr Ettlin believes it was attracted by light on the bedroom window and cut itself on broken glass when it smashed its way through.

I have the same problem with moths and lunatic ninjas. They see that bedroom light on and they have to be near it – whether there’s a window in the way or not.
Leave a light on and go downstairs for 10 minutes to get your cocoa and when you return, there are a variety of 14th Century Japanese warriors and Lepidoptera circling the ceiling bulb.
And your window is invariably broken.

Happily, Mr Ettlin was able to protect his wife and kids by performing basic wrestling moves on the kangaroo before ejecting it from the house. He now probably faces animal cruelty charges, but it’s a small price to pay for the fun of beating the local wildlife up.
In fact, since moving to South Africa, few things please me more than sneaking up and practicing my karate moves on a quietly grazing springbok – certainly a vast improvement on the rather unsatisfying hedgehog boxing we used to get up to back in the UK.

11 thoughts on ““I thought it was a lunatic ninja””