Yes, it’s i09’s list of people who live inside water towers. And after this post last week, you’ll all be aware that I would quite like to feature on the list, were it not for the small matter of the R76 million that I’m short of the asking price.

There are some pretty special buildings here too, together with the reminder that if you choose to live in a tower, there are certain logistical issues that you are going to have to deal with:

This brick tower with 64 windows was erected in 1898, and used for seventy years. It was bought by in 1989 by Elspeth Beard from Elspeth Beard Architects and renovated the whole six-level structure.
There are now 88 steps to the kitchen, 116 to the living room and 142 steps to the roof.

I think my favourite is this one from Guildford in the UK: 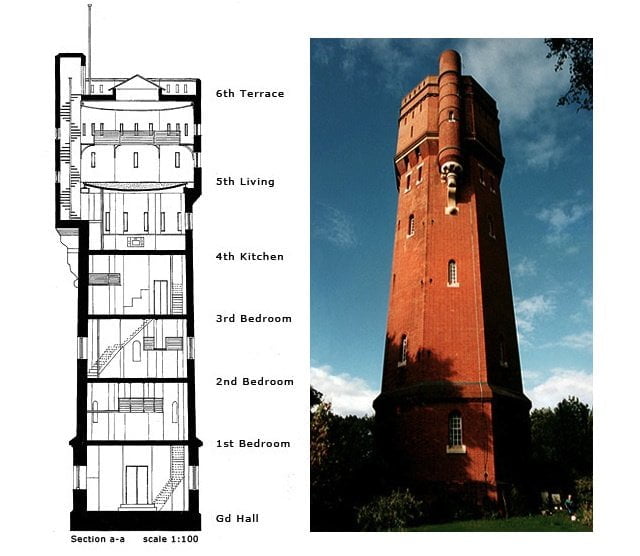 It’s just stupidly huge and grand – the Victorians certainly liked to celebrated their functional, industrial buildings. I like the school of thought that “it has to be here, we might as well make it look nice”, but to them it was a demonstration of their progress and achievement: a thing of pride. The upshot of this age of narcissism is a huge number of still spectacular, well-built and generally well-preserved industrial buildings across the UK.
Will our current utilities buildings last as long? Will we want them to?
I doubt it.

In this case, the water tank was on the 5th level, and the “external” spiral staircase provided access around the tank to the top of the tower. There’s loads more about this building here and here.

If money and bylaws were no obstruction, which building would you like to convert and live in?