I wrote the other day about the public sector strikes that are sweeping France at the moment and how it might affect our upcoming trip there. In doing so, I wasn’t (intentionally) belittling or trivialising the issues at hand. I recognise that the striking individuals feel that they have grievances and they’re exercising their legal right to strike. That’s why I touched on the reasons why they are striking instead of just being irritated that they might mess up (a bit of) our holiday.

It’s good to be informed.

At the same time, I’m pretty much powerless to assist them in their crusade, so I am actually irritated that they might mess up (a bit of) our holiday. Fair play to me too then.

And then, I received an email with a link to this article on the strike: 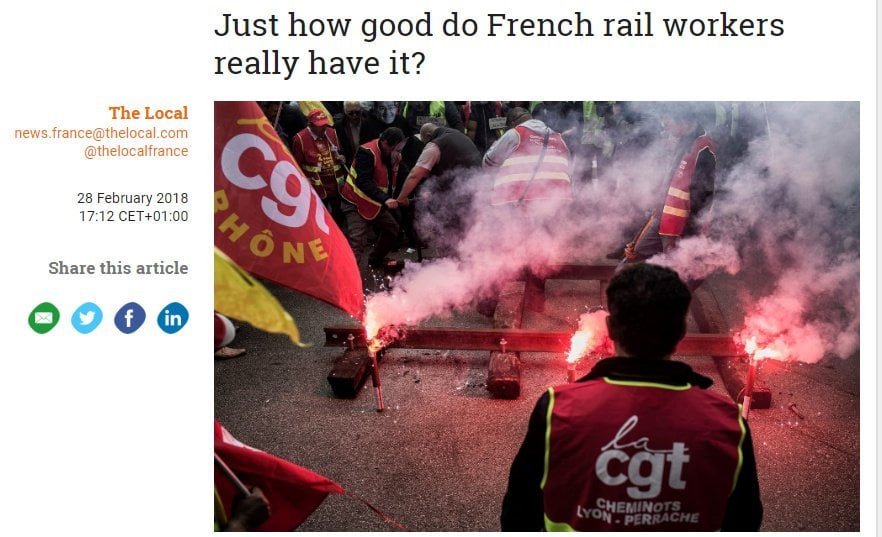 Now, for the record, je ne sais pas what the general political standpoint or reputation of news site thelocal.fr is, although their coverage of Asian Giant Hammerhead Worms invading French gardens is quite superb.

That’s for another time though, ok?

Anyway, the first thing I noticed when I logged on was this headline:

President Emmanuel Macron’s government unveiled plans to push through reforms of France’s mammoth rail system.
But the plans have not gone down well with rail unions who are threatening all-out war against the government, or in other words major strikes.

What has really angered them is the announcement that new recruits will no longer benefit from a special employment status of rail workers, which is fabled for the perks it offers.

What follows is a list of those perks, which include (but are not limited to) early retirement, guaranteed employment (no retrenchments), automatic career advancement, free rail tickets for family members, excellent pension benefits, above average wages, plenty of annual leave and subsidised housing.

Yes, it does seem very good. It seems very nice.
It does seem like they enjoy some sort of special status.

There are a number of thoughts that stem from this, none of which I’ve suitably ruminated over and I’m about to disappear back into the lab, so I’m just listing them here.

Firstly: why should the cheminots enjoy such special employment status? There are a lot of other jobs out there that are arguably more important (TB scientist, for example), more worthy (er… TB scientist again) and demand better qualifications to enter (cough… TB scientist) (not that sort of cough, I hasten to add) than working on the railways, but which have far less favourable working conditions.

Secondly: but then, shouldn’t we (humankind in general) be working towards having these sort of special conditions as standard for workers, rather than constantly dragging standards down to the lowest possible levels? I recognise that this is a pipe dream, but still, it’s surely not a bad way to start any process like this.

Thirdly: of course, on the flip side of this is that if there are going to have to be cuts across the public sector, then surely you cut from the ones that have the most, first. That does seem to be the cheminots.

And fourthly: the unions represent the interests of their members. If they simply stood back and allowed these cuts to pass with no objection, then they wouldn’t be doing their jobs. You can argue the validity of their claims and efficacy of their methods, but as unions, protesting against this kind of thing is basically what they’re there for.

And finally: I would just be much happier if this was all sorted before we go over there. (Spoiler: it’s not going to be)