There have been some wildfires recently. And while arson is likely to be the cause of some of them, could there be something even more sinister behind that arson?

Only yesterday, High Empress of the Western Cape, Helen Zille, sent out this tweet, “just asking” if the recent wildfires could be “accidental or coincidental”. 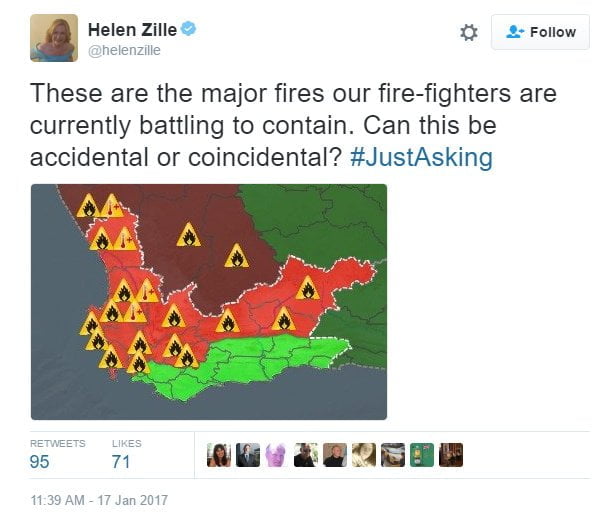 To be honest, we’re all well aware that she has jumped on the conspiracy theory bandwagon and is “#justasking” if the ANC has a deliberate, coordinated arson campaign in full swing in order to “destabilise the [DA-run] Western Cape”. And even then, is that “accidental” or “coincidental”?
In my view, it’s neither. I think that would be “deliberate” and “coordinated”.

The trouble is, even in sharing the image above, Helen has basically answered her own unasked question. The fires are all in red or brown areas – marked as such because they are very dangerous or extreme risk for wildfires. Next to some of the fire icons are thermometer icons. They show that there is a heatwave, adding to the fire risk. And then there’s the green bit towards the south and east of the province. Limited fire risk there. And no fires. And then there are the those three fires icons in the [ANC-run] Northern Cape. Bit of an own goal there, ne?

So wildfires in fire season in high risk wildfire areas, during a heatwave, in the middle of a drought? Yeah. Sounds like an ANC campaign to me. [pops on tinfoil hat]

Cape Town will always suffer from wildfires though, because of the volcanic mountain on our doorstep. I think most people are unaware of this – obviously the city wouldn’t want panic to ensue when the 4.5 million residents realised that they were living right on top of an explodey volcanological time-bomb. So they’ve not mentioned it.

Sadly, thanks to this erstwhile FB user, the cat are now out of the bag. 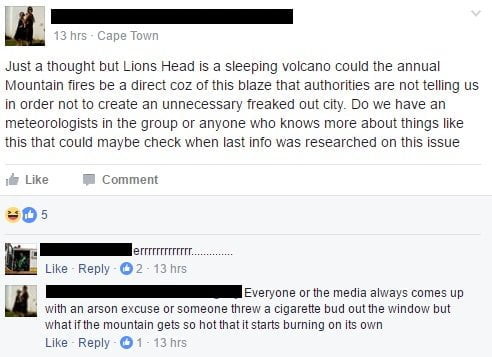 Yeah. I mean, how unlikely is that cigarette or arson theory when you look at the “Lions Head is a sleeping volcano” reasoning. Of course, Lions Head isn’t a sleeping volcano, it’s sandstone on top of Cape granite (see here), as any meteorologist will tell you (once they’ve… er… stopped foolishly looking at the weather), but don’t let that stand in your way as you crash wildly through the fragile boundaries of reality and into your scary, alternate, “everything is going to repeatedly be set on fire and they’re not telling us why” dimension.

Wait… OMG! Fires on hot days? I hadn’t linked the two. Ever. She might actually be correct. I mean, it never burns in winter, does it? You know: Winter, when the volcanic mountains go cold for several months and there are no wildfires. Checkmate, skeptics!

And just in case you are still a non-believer:

Suddenly. It. All. Fits. 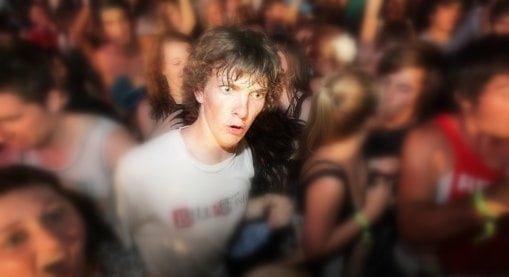 And our Facebooking friend has some advice for those who are commenting on her post:

Yeah. I mean, honestly. If you don’t know what you’re talking about when it comes to the mountain or the natural annual fires, then just don’t get involved, ok? Just like she didn’t.