I tweeted this last night, but it probably deserves a post of its own. So here goes.

First off, here’s the ad, although I believe that these things have a distinctly finite lifespan, so that link won’t last forever. Hence, I suppose, the additional need to screenshot and reproduce the blurb here. 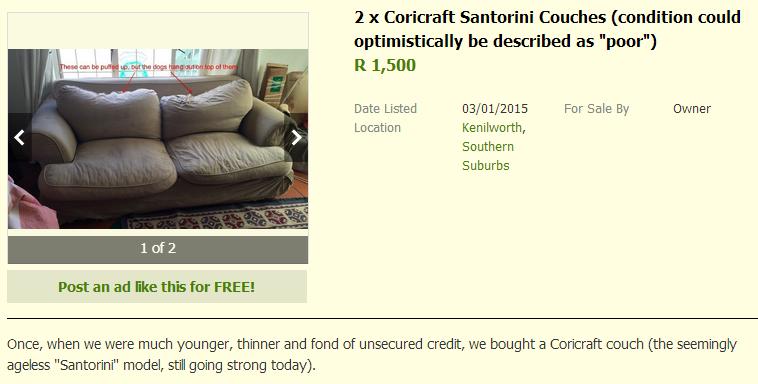 And then seller “Mark” waxes lyrical:

Once, when we were much younger, thinner and fond of unsecured credit, we bought a Coricraft couch (the seemingly ageless “Santorini” model, still going strong today).

Over time, we bought another, and matched slipcovers so we had 2 Santorini couches (and now one spare slipcover). In the same period of time, we produced two children (boys) and obtained 2 dogs (beagles). It’s not clear who was more responsible, but our generally beige/brown couches became more camo than any one particular colour, and was invariably covered in food, drink, wet dog and occasionally humans.

Over time, as the slipcovers have been washed and the dogs (or kids) have buried things in the bowels of the couch, they have begun to look a little more worn out that expected, and they don’t really smell very good. They have a number of tears, rips and general good natured family wear-and-tear that one would expect of these furniture workhorses (Big up to Coricraft – they really are the Toyota of the couch world. Pity they don’t have a trade in program). The only thing still solid is the frame, and that’s only because the dogs don’t have opposable thumbs or own a jigsaw.

We have now reached a point where the difference between re-covering these couches (to us furniture lay-folk) and buying 2 new couches is very little; so we are going to do precisely that. Which means our trusty family couches, complete with all the lego, biscuits, doggie chews, more that a few lost remote controls and whatever wildlife has made it’s home in the nether reaches are now up for sale.

You would think that by now we would just give them away, but for both sentimental reasons and because the gent at the store assured us they still have a value and we could totally sell them – these couches are now available for the very reasonable price of R1500 for both (less than the cost of a dinner for 12 at the spur, or one of those 4 slice toasters that can reheat bagels).

This is your chance to own a piece of history (and more than a few pieces of fossilised food). This would ideally suit students with minimal money and a strong immune system, or someone with access to upholstery skills and some spare time (must go as a set, sold as is. you have been warned about the condition. spare slipcover, or whats left of it, included. no takebacks. beagles not included.)

You can see one of those beagles here. My experience of beagles is that they don’t actually require opposable thumbs or a jigsaw in order to be able to destroy everything you own (including the frame of otherwise sound furniture), but despite the “condition could be optimistically described as poor” comment, Mark has obviously got off lightly in the destructive beagle stakes.

All Mark wants to do is sell his couches and get a bit of brass in pocket. He didn’t need to give us his life history, nor the detail about the filth that the buyer can expect to find within their new purchase, but I’m very, very glad he did.