…the moerse storm which is due to make landfall in Cape Town late Tuesday or early Wednesday. Big storms are always big news, but because of our ongoing drought, this one is definitely more eagerly anticipated than most. It’s also arguably the biggest since this puppy hit us in August 2008.

Here’s the latest satellite image of our friend off the South West coast right now (0800 Monday): that dark area with a horn on it like some sort of malevolent unicorn. 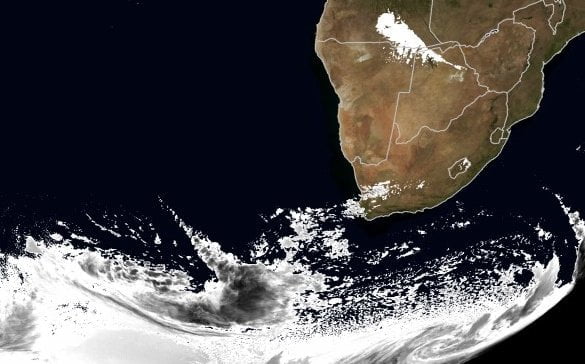 Currently (Monday morning), Windguru is predicting 53.8 welcome millimetres of rain beginning at 11pm on Tuesday and continuing until Thursday evening.

The Boland area in particular seems likely to receive large amounts of rain, especially towards the mountain catchment regions where rainfall is likely to be heavier due to orographic effects. We should be able to expect rainfall measurements anywhere from 50mm to 100mm in the far SW Cape and Boland area.

And given the extreme nature of the deep low pressure area right now, this seems appropriate: 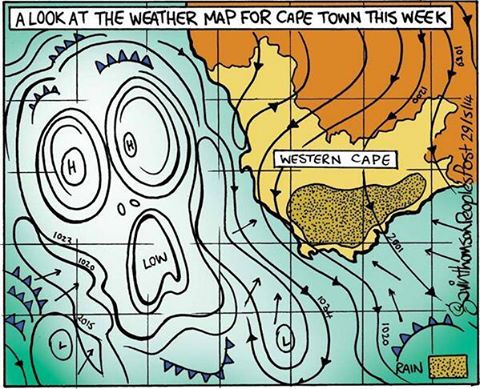 The rain is great, but I’m looking forward to the wind, which will be topping 100kph (Wednesday lunchtime) and which will be playing its part in generating swells of 11 metres (Wednesday afternoon/evening). Worryingly, this coincides with high tide on Wednesday (14:28), and with the moon almost full, there’s likely to be some flooding along the west coast.

Still, have camera, may well venture out.

Thursday looks to be the coldest day of the week with a chilly maximum of 12°C. So if you’re in Cape Town, wrap up warm and do your bit to try to help those less fortunate. And remember your emergency numbers:

11 thoughts on “Everybody’s talking about…”