You know the problem. You’ve gone and murdered a few thousand ethnically different people and now the nanny state authories are unhappy for some reason and they want to arrest you and take you to Holland.
And we’re not talking special cafes and scantily-dressed ladies in Amsterdam – we’re talking war crimes courts in The Hague, Europe’s third most boring city behind Brussels and Brussels.

The only way to avoid arrest is to hide. By growing a big fluffy beard. 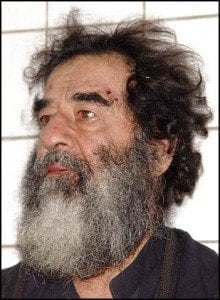 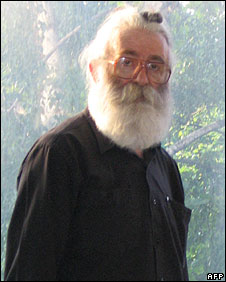 It won’t work forever, but it will give you an extra few years to pursue your other interests, be they hole-dwelling or alternative medicine. And it’s mobile – you carry your disguise around with you. On your face. Clever.

The trouble is that now both Saddam Hussein and Radovan Karadzic have utilised this method of concealment, the authorities know exactly what to look out for. That being, of course, big fluffy beards. Which makes you wonder – what have Gandalf and Father Christmas been up to and how long before they get arrested?

“Sorry son, Christmas is cancelled this year. Remember: Santa is on trial for ordering the slaying of 3,000 innocent muslim men. You can have your train set next year if they haven’t hanged him.”

8 thoughts on “Delaying arrest with Sad and Rad”