Remember back in January when I described an evening out at Societi Brasserie? Of course you do.

Societi Brasserie claimed that evening to be in “Constantia”, where it isn’t.
Now, for those of you outside the Mother City, wikipedia describes Constantia as:

an affluent suburb of Cape Town, South Africa, situated about 15 kilometres south of the centre of Cape Town

and that’s a perfectly reasonable representation of the place. It’s green, leafy, pleasant. It’s posh. And that’s why people want to be there. Not least the ANCYL, who earlier this week named Constantia as one of the places that they wanted land:

Yozi singled out Constantia and the Rondebosch Common as land that could be given to the province’s poor.

(you may remember Yozi from this post about extra holidays) (but I digress) (often).

Constantia is sought after. Having the name in your address adds an extra 25% to your house price and a certain something to your standing. And perhaps that’s why so many places claim to be there, when they’re actually somewhere else. If we choose to believe these places, then it’s not hard to see that Constantia, like the Universe, is expanding. I’m calling this phenomenon “Conspansion”.
And I saw some more of it while eating steak at the Hussar Grill last night:

Yes folks, Steenberg Village is now in Constantia. Not Westlake (where it is) or Tokai (where it’s near), but Constantia.

How quickly is this Conspansion taking place? Well, here’s a handy map to help you out: 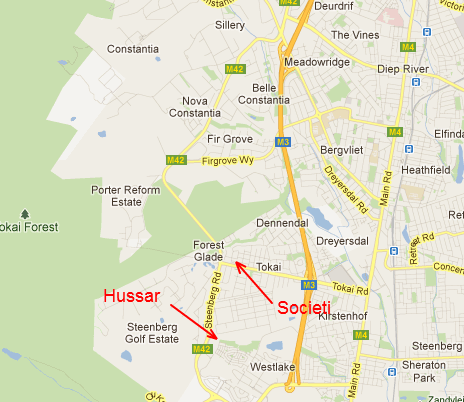 If you look towards the top left of the map, then you’ll see Constantia labelled clearly as “Constantia”. That’s where Constantia is and where it’s been since the mid 1600s.

You may then note its progress south, to Nova Constantia and Belle Constantia, the latter of which I found first reference to in a document from the 1850s. I’ve been doing some rudimentary calculations and it seems to me that the rate of Conspansion was about 1km in two centuries. That’s about 0.005km per year.

Let’s consider now the period from 1850 to January 2012, when I was at Societi Brasserie. So about 162 years in total, and Constantia expanded by about 3km. That’s a conspansion rate of 0.019km per year – about four times as quick as the previous two centuries. The warning signs were there – we just didn’t see them.

Because last night, as I mentioned above, I noted that Constantia has now expanded as far as Steenberg Village – a further 700m south from Societie in … er… Constantia. 700m in 7 months.

Suddenly, we’re faced with the terrifying scenario whereby conspansion has not only topped the threshold level of 1km per year, standing at 1.21km per year, but also that the rate of increase is an incredible 6268.42%.
“Ish just got real”, I believe is the appropriate modern terminology.

If Conspansion continues unchecked at these rates, soon all of the peninsular will be Constantia. Forecasts as to what exactly will happen then are mixed. While some experts believe that Conspansion with stop at Cape Point lighthouse in Constantia, the majority suggest that we will witness an ever faster Conspansion moving eastward, beginning with the gentrification of Retreat, Lavender Hill and Mitchell’s Plain before Nyanga and Khayelitsha are swept up in an all encompassing Constantia.

Tony, Yozi – stop with the protests and marches. Stop with the violence. Just be patient. You don’t need to come to Constantia – Constantia is coming to you.

And by my reckoning, it’ll be there by February next year. Just in time for Valentine’s Day. Lovely.
Then we can all be friends and neighbours. And you can stop stoning cars on the N2 in Constantia.

Please forward me any examples of Conspansion so that I can update my database accordingly.