This is a sad post. I’m finally saying goodbye to my Nike Total 90 flops that I bought for [exorbitant] Rands, [several] years ago.
If each dog year is worth seven human years, then each flop year must be worth about twenty. And the fact that these guys made it well into triple figures is testament to the effort of the kids in the southeast Asian sweatshop in which they were created. 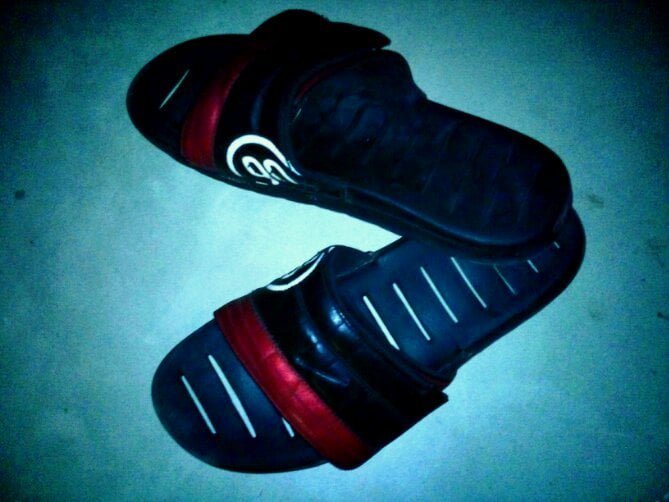 They’ve been everywhere and done everything with me. But now they are on their last legs and cracks are beginning to appear. Literally.
On Monday, barefoot, I’m going to be scouring the sports shops of Cape Town searching for a replacement pair, with a tear in my eye.

My subject is War, and the pity of War. The Poetry is in the pity.

I was reminded of this poem by a dead body being found on Liesbeek Parkway earlier in the week and a tweet about the resulting traffic chaos that ensued. Not a pleasant event and this isn’t a hugely positive piece of poetry, but it is very powerful.

Move him into the sun –
Gently its touch awoke him once,
At home, whispering of fields unsown.
Always it woke him, even in France,
Until this morning and this snow.
If anything might rouse him now
The kind old sun will know.

Think how it wakes the seeds, –
Woke, once, the clays of a cold star.
Are limbs, so dear-achieved, are sides,
Full-nerved – still warm – too hard to stir?
Was it for this the clay grew tall?
– O what made fatuous sunbeams toil
To break earth’s sleep at all?

Owen was a soldier during World War I and documented the horrors of what he saw in the trenches of Northern France. He died a week before the conflict ended in November 1918. “The telegram of his death reached his parents as the bells were ringing out to announce the Armistice.”
He was 25 years old.

Classical music yesterday, classical poetry today. I think I’d better get some rap music and naked women on here tomorrow before my readership completely defects to Bangers and Nash.