Great news this morning in my feed reader: one of my favourite bloggers, Brian Micklethwait of BrianMicklethwait.com has returned to blogging after an extended summer break.
In fact, so long was his hiatus that I had feared we’d seen the last of his eclectic mix of politics, social commentary and photography.

However, as Brian says:

But now I’ve had my little holiday, and have learned that although blogging may sometimes be a bit of a grind, it is, for me, greatly to be preferred to the alternative of not blogging.

Which is exactly how I often feel about the whole thing too.

I’m almost back in the land of the living and so is the Mother City following a 24 hours of horrendous meterological conditions which left us facing the triple onslaught of rain, snow and hysterical news reports.

With the N1 flooded and De Waal Drive full of big rocks, there was sudden interest in Cape Town traffic news, including webcam sites. Even Seth at 2oceansvibe was in on the act, grandly proclaiming (as is his wont):

This WILL change your life

Hmm. It won’t change mine much. 6000 miles… has had a Cape Town Traffic Webcams page for nearly two years now. I don’t use it (or publicise it) as much as I used to, because I don’t work in town anymore, when it was personally more useful to me.

However, given the sudden renewed interest in all things Cape Town and traffic, maybe it’s time that I gave you the address again:

Save it. Take a quick peek each evening before you head home – it might save you some stress.

In other news: it seems that Mozart may have died from complications following Strep throat:

NEW YORK (Reuters) – The death of composer Wolfgang Amadeus Mozart at the age of 35 may have been caused by complications stemming from strep throat, according to a Dutch study published on Monday.

As a 35-year old currently suffering from Strep throat, I found that this news did nothing at all to aid my recovery. It’s complicated.

And finally – not all bad weather is bad news. Sometimes bad weather can be beautiful, as proven by this post on MissMoss.co.za – with some stunning images of Franschhoek and surrounds in the snow.

Fans of the Manic Street Preachers will know that Richey James Edwards, ex-lyricist and guitarist, when once asked about whether the band was serious about their brand of music, carved the words “4 REAL” into his arm with a razor blade he was carrying. The injury required hospitalisation and seventeen stitches.
Two questions spring immediately to mind here: Firstly, why was he carrying a razor blade? And secondly, why did he slice open his forearm with said razor blade?
The answers are clear. Richey James Edwards was a complete fruitcake.

Talking of which, I came across an utterly brilliant website recently. Well – it’s either brilliant or completely fruitcake – hence my posing the question á la Richey Edwards, “4 Real?”.

The inventor of the Kadir-Buxton Method and author of the site by the same name appears to be Labour Party activist and all round fruitcake, Andy Kadir-Buxton. And he has all of our best interests at heart:

Making the world a better place
Decades ago I discovered a cure for mental health problems. The cure, which I term the Kadir-Buxton Method, has been used on a wide variety of mental health problems. The procedure stuns and resets the brain of the patient, so that the patient returns to a normal condition. The Kadir-Buxton Method is done by making a fist of both hands, and striking both ears of the patient at exactly the same time and pressure with the soft part of the inner hand which is where the thumb joins the hand.
The procedure is painless and the patient regains consciousness faster the less hard the double blow is struck. With practice, I am able to render the patients unconscious for only thirty seconds. Other individuals have fared even better.

Sounds good. I sometimes find that I need my brain reset. Mainly after reading stuff like that. But, if I’m completely honest, that just sounds like you are giving the victim patient a punch, no?

At this point I would like to explain the difference between a stun and a punch. With the Kadir-Buxton Method, a patient standing on one leg whilst holding a rose would still be standing on one leg and holding a rose when they were cured. With a punch, the patient would be lying prone on the floor, and could well have dropped the rose. And just to add insult to injury, they would still be mentally ill. Try it for yourselves if you do not believe me.

I was going to test this claim, but I couldn’t find any roses or (surprisingly) volunteers.

I haven’t had chance to go through the whole Kadir-Buxton website as yet, mainly because I only got so far before my sides were aching from laughter and my brain needed a break from the endless stream of unbelievable bullshit that it was being bombarded with. I was about to stop – but then, this:

In the 1980s I fended off an unprovoked attack. What I did was hit my attacker in the Jugular vein in the neck hard with the tip of my finger. (The Femoral artery in the leg can be used in the same way as an alternative.)

Whilst my attacker was incapacitated on the floor by this martial arts technique I gave the person a bruising slap round the buttocks. When the attacker came to it was said that the experience was even better than sex.

Having just been the attempted victim of an unprovoked attack, and having incapacitated the would-be attacker with a martial arts technique, how many of us would then have given the floored bloke a good kicking to teach him a valuable lesson? How many of us would have simply walked away? I know I would have probably done both.
I would suggest that there would be very, very few of us who would have spanked the gentleman round the buttocks and then awaited his eventual return to consciousness in order to gauge whether our actions had stimulated him, sexually-speaking?
That’s what makes Andy Kadir-Buxton different from you or I. That’s what makes him special. That’s why he makes these sort of discoveries:

I knew at once I was on to another invention.

Indeed. Whereas your would-be attacker was wondering where the hell he was, how he got the ball-gag in his mouth and why he was chained to a radiator. Oh – and what on earth you were doing in that PVC catsuit.

I would be extremely disappointed if there is not more mirth, merriment and overall fruitcake goodness to be had from the Kadir-Buxton site. After all, how many websites can you name which have statements like:

As Governments around the world have been looking for a safe alternative to sex this appears to be it. A simple arm lock from a consenting friend is enough to make life enjoyable. The length of unconsciousness depends on how hard the strike is and the ability to judge comes with practice.

Yes, there is a message for us all in the writings of Andy Kadir-Buxton.
The trick, once you’ve got that message, is to completely disregard the message and run a long, long way away.

Some blogs have confusing, technical or arty-farty titles. Others are more empirical.

Table Mountain From The Car features a daily photograph of Table Mountain, taken from a car. Which is brilliant. 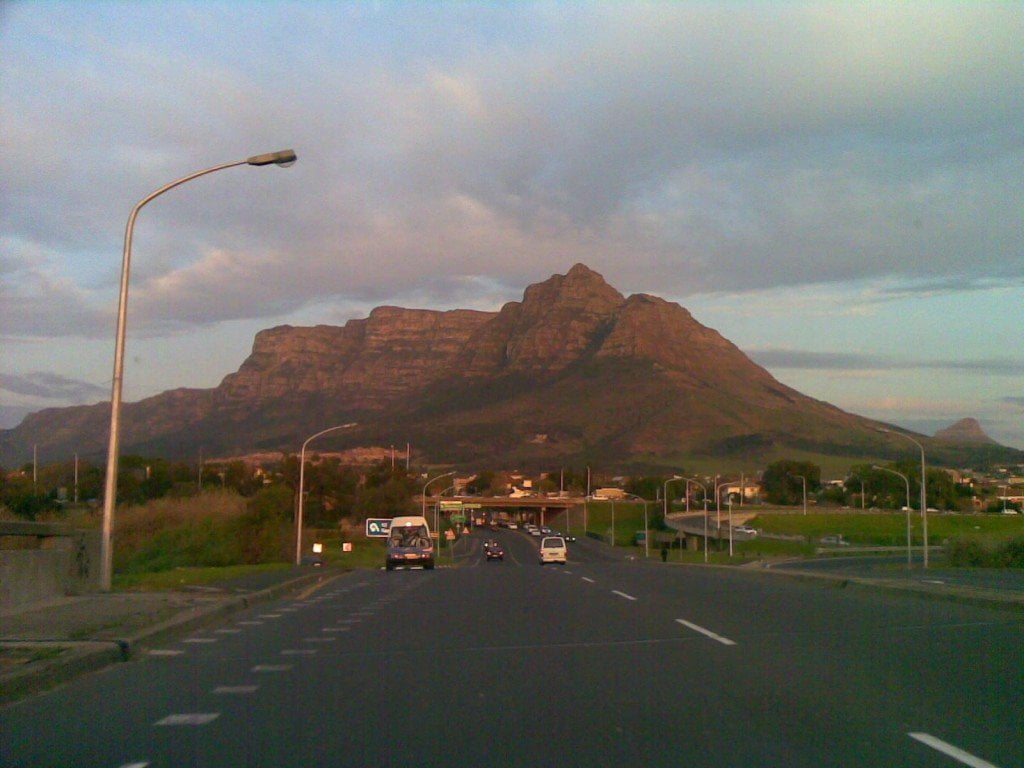 There now, that was pretty straightforward, wasn’t it?

EDIT: TMFTC appears to be the brainchild of Just Plain Ron.