Herewith proof that you can write a perfectly acceptable blog post (IMHO, anyway) while cooking a rather tasty chili con carne. The carne in question being beef and ostrich. I can like to be supporting the local cow and bird slaughtering industries.
The builders are still here and the internet is still almost completely unavailable, the playroom is all over the living room and the study doesn’t even exist in any functional sense. It’s beginning to get me down and I really wish I was going to a five star resort for a weekend away in the very near future. More on that later, maybe.

Anyway, that’s your lot for now. I will probably be back to my best when I can actually use my own computer and not Mrs 6k’s laptop and its dodgy Vodacom GPRS connection from the kitchen. Maybe I’ll say something truthful but horribly controversial like “Caster Semeya looks like a man” or “South Africa is actually a really nice place to live if you’re white”.
Maybe I won’t. It’s this sort of suspense that gets readers coming back time and time again.

But for now, it’s back to the red wine and the dangerously hot dinner.

Having just arrived home after a hellish day, I find that I have a hellish evening in front of me.

Although I wanted to blog about Justice Malala’s column in The Times this morning, I have to empty the old study completely this evening so that it can be converted into a playroom for the kids – tomorrow – even though my new study (or my new playroom, depending on how you look at it) is yet to be completed. Thus, I am going to be struggling for space and connectivity for a week or so and I have absolutely no time spare for blogging this evening. Joy.

Anyway – that column had some iffy writing at the start (in my humble opinion), made some rather unfounded claims in the middle and ended with a weak, watery and emotional conclusion, but did hit a few nails on a few heads in between.

The real problem with the Huntley decision is its unbelievable ignorance. Those from the middle classes, such as myself, suffer from crime daily. The majority of this class is white. This class happens to have a voice, reach and power. The stories of middle-class and primarily white suffering from crime make the news headlines every day.

Democratic South Africa is 15 years old. Before that we had 46 years of apartheid racism characterised by ruthless enforcement of policies aimed at keeping blacks down and pushing whites up. The division and racism that characterised apartheid South Africa can still be seen in many parts of our country: in business hierarchies, in school pass rates, in academia.

The number of blacks who have broken out of the poverty imposed by the apartheid reality remains minuscule. We can have debates about how one resolves this, but the reality exists — and persists. And therein lies the rub. Are whites targeted by criminals? The Canadian panel seems to have swallowed this story. In its own perverse way, the panel’s decision reflects the hugely skewed manner in which many in our own country and others in the outside world view South Africa.

Which is basically what I have been saying all along. It’s not that Huntley’s stories were untrue – it’s just that they were unrepresentative. That’s why there’s been all the fuss about the whole affair and that’s why – apparently – he’s about to be kicked out of Canada.
Now, if you’ll excuse me, I’m about to get kicked out of my study.

With the kick off of the 2010 World Cup just 279 days away, the Green Point Stadium in Green Point seems set to be renamed. Originally, the name mooted was the African Renaissance Stadium, but who wants to play football in an ARS?

Thus, the Cape Town City Council have proposed that the new name for the new stadium should be (and I hope you’re sitting down for this):

It’s both brilliantly simple and straightforward and really, really unimaginative. However, there is apparently method in their madness:

On Wednesday the mayoral committee approved the naming of the stadium going for public consultation after agreeing that “Cape Town” would offer the most brand value, together with flexibility in selling commercial rights for optimal financial and marketing benefits for the city.
Other stadiums in South Africa have either geographically linked, commercial, cultural or heritage names. It was noted that a cultural, heritage or personality name would restrict the selling of commercial rights.

Either way, this latest photo released from the 2010 Organising Committee on their twitter feed shows just how well work is coming along: 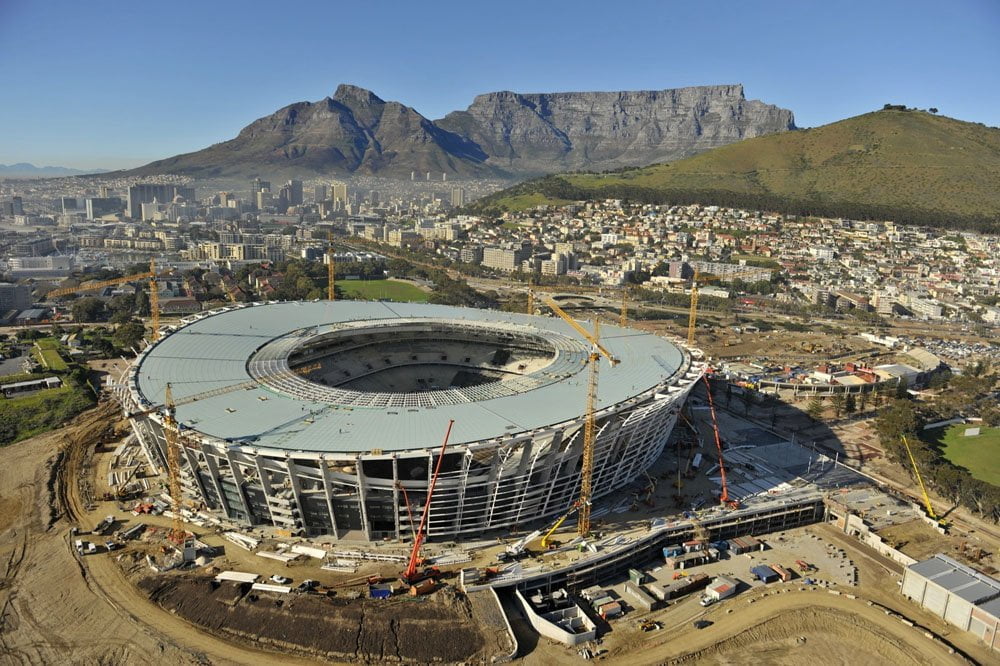 Amazing.  You just can’t fault a setting like this.

We’re almost through winter and still ahead of schedule for the official completion/handover date in December. I’m hoping that my study will be completed by then as well. Although I doubt that Jacob Zuma will come to the opening of that.

At least, he hasn’t RSVP’d yet.

There are many reasons why this dichotomy exists. Perhaps the greater numbers of tickets available for a larger venue, less demand, financial concerns or – most likely –  the fact that most Capetonians haven’t actually got around to heading onto the Computicket website, because it’s Friday, dude and the weekend actually started last night.
Jo’burgers will have been up at 3 to avoid the traffic and, having arrived at work at 7, will have proceeded to buy their tickets immediately before doing that filing, writing those reports and sms’ing each other about how great it was to have a thunderstorm last night and did you see the clouds that looked like a spaceship and there was lightning and how summer is almost here with it’s lovelyrain and hail.
These things make them happy, which is not great, because everyone knows that a happy Jo’burger is annoying.

You can tickets via Computicket for both concerts. I notice that Computicket have now officially labeled the Cape Town gig as “Paarl”, which is technically more accurate. The Killers’ official website is sticking with “Cape Town”, though. Probably because Americans don’t even know where South Africa is (there’s a hint in the name, guys), let alone Paarl.

I have mine. I know others who have theirs. You’d surely be silly to miss out.

I’m off to watch the footy, but while I’m gone, please look at this page:

Yes, I’m pushing it. But then it is for a good cause and it is on Wednesday evening.

Meanwhile, here is a photograph of my daughter with some ravioli on her ear: 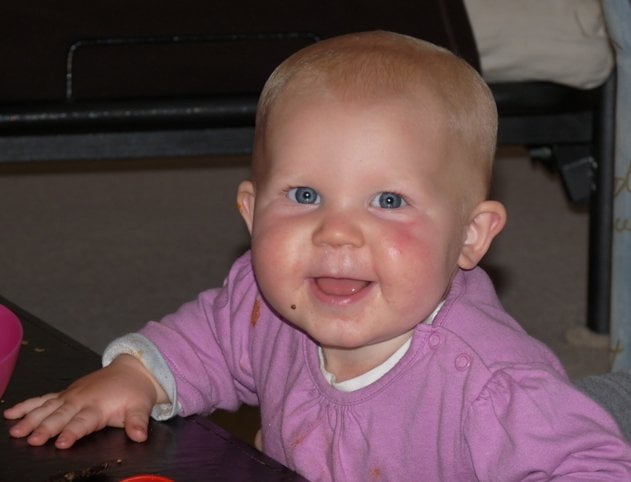 And no, that’s not a Cindy Crawford style beauty spot, it’s… it’s… well… look, I don’t actually know what it is, but it washed off in the bath.