After the misery of yesterday’s Wembley play-off defeat, I’m all ready to give up football for good.

But I could do with some good footballing news to take away a little of yesterday’s hurt – and I may just have got it.

Following a mysterious call to my cellphone a few days ago, I have now received an email telling me that I have won tickets to the Confederations Cup next month. Now, I know what you’re thinking, but this isn’t like the “You’ve won the Nederlandse Staatsloterij” emails that you and I are always getting. (I have now secured over €1bn on the Dutch Lotto without having spent a single cent. It’s great value for money.)

No, this email appears to be from a competition that I actually entered and they don’t need $300 to let me have my prize. Also, the email originated in South Africa, the telephone numbers match up and there were no spelling or grammatical errors. If it is a phishing scam, it’s a damn good one. So good that I’m almost tempted to give them the information they need.

I’m still not completely convinced though, so watch this space. I refuse to get excited because I very rarely win stuff. My biggest haul ever was a month’s supply of breakfast cereal for winning a quiz on KFM. And I had to chat to Nic Marais to get that – I surely deserved more.

Maybe the reason I rarely win stuff is because I rarely enter competitions. Although, that means nothing, as my Nederlandse Staatsloterij success proves.

I have just spent a very pleasant afternoon with Ian MacDonald of SA The Good News, two bottles of rather decent red wine* and our respective families. Which, with the toddler to adult ratio of 3:4, kept us fairly busy chasing around the house and garden. And slightly overdoing the steaks as a result. Sorry about that. How very emboeressing.

What amazed me is that, although Ian and I strongly agree on certain things – principally optimistic realism instead of pessimism when looking at South Africa –  we do so despite coming from very different backgrounds and, it turns out, fundamentally different political standpoints as well. Which obviously just proves that all you need is brains (and – perhaps coincidentally – good looks) and the ability to look at things reasonably and objectively, and while you may be approaching things from different angles, the conclusion is the same.
I can’t speak for Ian, but this sort of discovery gives me further belief that my theories and thought processes are valid and sensible.
And that red wine is just great.

I had a bit of a pop at SA The Good News back in June last year, which earned me a mild rebuke from Ian. Today, fuelled by red wine and an obvious passion for his work, he outlined his mission to me once again; that SAGN is there to balance the ridiculous and sensational negativity presented by news sites like iol.co.za and news24.com. As Ian pointed out, while SA The Good News does have an obvious bias because of its agenda, at least it clearly states it from the title onwards. Which is more than you get from those news sites.

Another interesting thing about our conversation was discussing the trolls we get on our respective sites. Several names that he came out with have certainly popped onto 6000 miles… now and again and been offensive, racist or – more often – offensive and racist.  Which, once again, made me wonder how many of them there actually are out there. The thousands that they claim, or six of them with a RSS reader and no life?

All in all, it was a great way of spending a Sunday afternoon. And now, blogging, listening to Placebo, AFI and Apoptygma Berzerk and reading (amongst others) Brian Micklethwait, who just came out with this gem:

…a friend from foreign parts is in town and we are, we have just decided, meeting up for a drink.  And I hold drink with all the effortless facility of a kitten holding a packed suitcase on its back.

Which reminds me why, having been up since 4:30 this morning and having consumed my fair share of damn good grape juice, I must now head to my bed via the kettle. 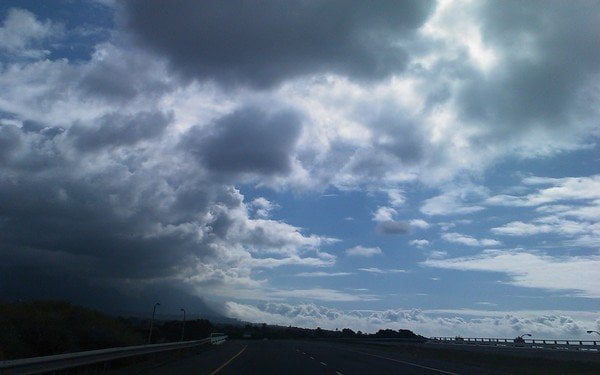 From here, via here (who also gave us this). The lower one being particularly apt as Mrs 6k and I are hitting the dizzy nightlife of… *ahem*… Kenilworth this evening to celebrate our years together. But I am not sat in traffic. Nor do I have a laptop or a portable inkjet. No such fancy technology, I’m afraid. And anyway, Cape Town drivers would surely just ignore any such message.

I do have car charger for my phone though. R25 at the lights in Somerset West.
Note to Mr Wonder Husband: Simple is usually better.