Do you remember the now infamous PistoriusBalls series? Some people thought it was all over, and it was then. But suddenly the State decided that actually, possibly, maybe they could swing a murder verdict, and thus there was an appeal. And with that appeal…. came AppealBalls! 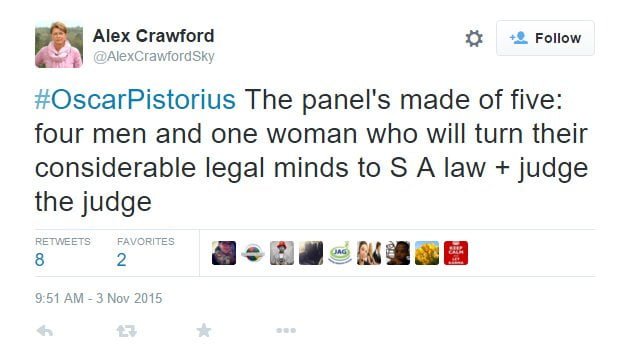 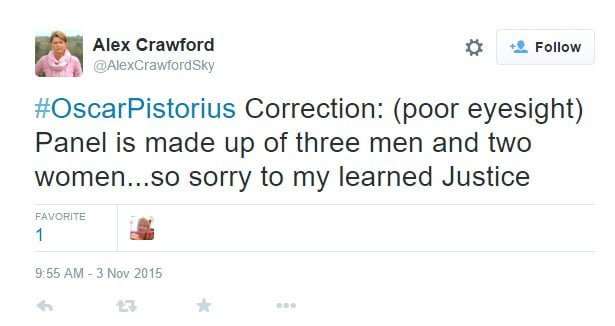 Dude looks like a Lady! Except… you know, the other way around. 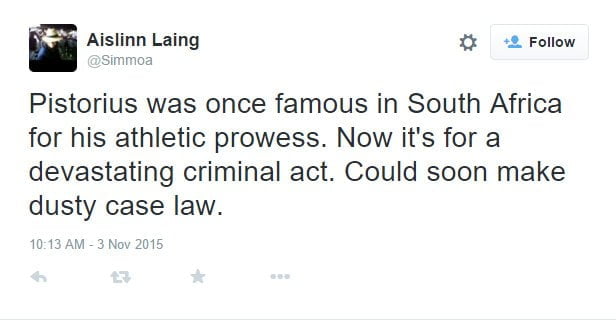 This tweet works best if you embellish it just  a little and imagine it being said in a 1940’s New York private detective voice:

The doll was in the restroom when he filled her full of lead. Pistorius was once famous in South Africa for his athletic prowess. Now it’s for a devastating criminal act. I don’t usually take cases involving famous people. No private eye needs that kinda attention. But line him up in front of the district attorney and a stenographer and he could soon make dusty case law.

Mandy’s still around, too:

Or what gender they identify as, hey Alex?

Thanks be to she who invokes Homer Simpson. Because yes, it’s definitely time for a beer.

Sentencing is complete and I was going to let it lie, but this just cried out for PistoriusBalls recognition and seemed a fitting way to end the series.

Pistorius disappeared to the cells down these stairs – 23 in total with a door at the bottom. #OscarPistorius pic.twitter.com/XJCo3RmqOR

Verdict time, and it’s all about who can get some last minute self publicity for their unique take on the Oscar Pistorius trial. Early contender, Rebecca “Moar Whimsy” Davis is contending early with this, from just 12 minutes in:

While legendary Oscar veteran Barry Bateman is already blowing things up out of all proportion:

#OscarTrial Masipa: the accused admitted that the gunshot wounds were inflated by him. BB — Barry Bateman (@barrybateman) September 11, 2014

#OscarTrial Masipa pauses for a sip of water…

I’ll save you the minutia about Judge Masipa’s breathing habits. For the moment.

Meanwhile, how would you describe the courtroom?

This courtroom though, hot like a Durban curry #OscarTrial

Thus, what follows is a damning slur on the Durban curry industry generally. Although, there’s probably a market out there for thick and sweaty curries. Maybe.

The air in court is thick and sweaty. We’re crammed into the benches like sardines & the labouring air conditioning is proving ineffecctive. — Aislinn Laing (@Simmoa) September 11, 2014

We have been talking about Mens Rea, about which I understand very little. If only it was Chris Rea instead *hums Road To Hell*

Tomorrow, thanks to that early ajourney: maybe Bonus Balls!

It’s Friday, and in an attempt to get through to the tea break before anyone else, Andrew Harding is in the courtroom early today and he’s brought his musical analogy collection with him:

Yesterday Prosecutor Nel gave us his greatest hits. The defence are promising more of a symphony today, as they sum up their case.

Andrew has his eye on Barry Roux:

Barry Roux is already at his desk in court – writing furiously by the looks of it. #OscarPistorius — andrew harding (@BBCAndrewH) August 8, 2014

He’s “writing furiously by the looks of it”? Why “by the looks of it”? What else do you think he might be doing?
How can the action of “writing furiously” at a desk in a courtroom be mistaken for anything else?
What other task might he be carrying out that may lead you have even a semblance of doubt that he was not writing, furiously?
I put it to you that if he is sitting at a desk, in a courtroom, with a pen in his hand, moving it furiously over some paper, then it’s highly unlikely that he’s sowing radishes or piloting an Airbus A380.
He’s writing, isn’t he? Furiously.

By the looks of it, anyway.

What an odd emotion for him to be showing, given the circumstances.
But at least he’s not tired today:

But exhaustion is obviously affecting some people. Look at this tired attempt at humour:

At least the Pistorius trial has taught me what ‘Nil by mouth’ means, which I previously thought was something ppl say to decline oral sex

But then there were no more week and they were gone. And, quite possibly, so is this series.

Summing up, and thus we’re getting towards pretty much the last chance for the journos in the court to come up with The Quote or The Soundbite which will be The Title of The Book about The Trial.

The BBC have gone with “Mosaic”:

“If one piece of mosaic is moved, the rest has to move as well to keep picture intact,” says Nel, of #OscarPistorius evidence.

#OscarPistorius Nel insisting OP lies had a ‘snowball effect’. After telling one, it kicked off another and another to make everything fit — Alex Crawford (@AlexCrawfordSky) August 7, 2014

And SA’s ECR with “Domino”:

No. 5: The tailoring of evidence had a domino effect. Once he’d “moved” the fans, he had to create a version about how the duvet got there.

Nel has included “hyperlinks” to his heads of argument which are shown on screens in court. Very high tech. @eNCAnews #OscarTrial — Dianne Hawker (@diannehawker) August 7, 2014

The competition as to who will be the first to tweet the tea break announcement is as tight as ev… oh, no, it’s reigning champion Andrew Harding as usual:

And this simply can’t be true.
I’m pretty sure the judge would not allow him to do either of these things in court:

Nel is getting into the state witnesses and screaming. @eNCAnews #OscarTrial — Dianne Hawker (@diannehawker) August 7, 2014

“Mr Nel, would you please keep your voice down and remove yourself from that state witness.
At once!”