You know, you’re just wandering along one day, minding your own business, dressed (obviously) as a tomato, when suddenly, out of nowhere, a mayor runs up behind you and injures you (obviously) while trying to leapfrog over you. 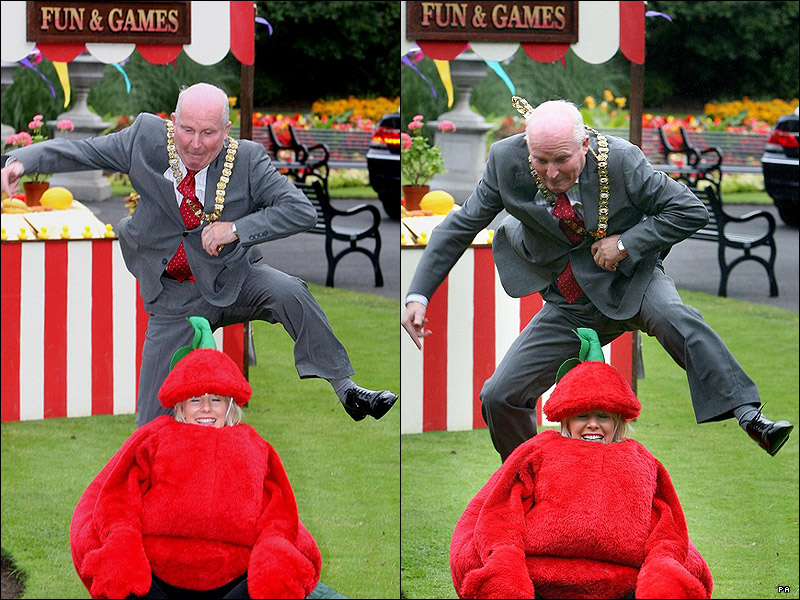 Here’s the full story, which also has detailed footage of the incident. Sometimes even I am lost for words.
This is (obviously) one of those times.

As seen at the V&A Waterfront: The open parking is not open.

While the weather here in Cape Town has been pretty miserable of late – a succession of cold fronts bringing wind, rain, more wind and more rain to the peninsular, life is no better in the UK.

Of course, it’s summer there, so they’d be expecting rain. Add that to the fact that Wimbledon starts today and it was the Glastonbury festival this weekend and you could have predicted precipitation.

That said, I don’t think many people expected it quite as bad as it was.
For example, check out this picture snipped from the BBC News website earlier today:

Bassey: grounded
That’s right. The weather in the UK is so bloody awful right now that they had to ground Dame Shirley Bassey.
Apparently, there were worries that she would drift away like a giant zepplin. Extra cable had to be brought in from Poland to tether her securely to terra firma.

“This unprecedented action was taken due to the inclement conditions,” said a spokesperson for the singer, “Usually, we allow her to fly throughout the summer, before locking her away in a hanger near Cardiff for the winter months. But we had no choice but to ground her due to the heavy rain and strong winds. We hope to have her flying again before the end of the month.”

There is a terrible disease sweeping across Africa. OK – there are several of them, but this one is really nasty. The symptoms include false hope, political gain and setting HIV/AIDS programmes back immeasurably.
We’ve mentioned South Africa’s own dear Health Minister – Manto Tshabalala-Msimang – on this site on more than one occasion, including her support for the Germanic conman Mattias Rath and her advice that a diet of garlic, african potato, turnips, lemon juice and olive oil can cure HIV. (Incidentally, even dear Manto is unwell). We even chatted briefly about the Deputy President of the ANC and his belief that taking a shower after having sex with an HIV positive individual will prevent you being infected with the virus.
Thank heavens that these individuals aren’t in positions of power and responsibility, hey?
Hmm.

Anyway – it’s all over now. Step forward Yahya Jammeh (ja, ja…) – who “just happens” to be President of The Gambia. He’s sorted all our problems out by discovering that a herbal remedy and a good dose of prayer will rid your body of HIV. And yes, that includes removing its integrated nucleic acid from every last one of your cells. Incredible. He treats people on Thursdays and claims he can cure them in 3 days. Which should make for a pretty good Saturday night out, assuming all goes well. Sky News interviewed him while he was actually doing the biz – a superb demonstration of multitasking and altogether fascinating stuff.

The thing is, I can see you laughing at these stories in your comfortable Western homes and offices. What you need to realise is the terrible truth is that people believe these claims, they stop taking their ARVs and then they die.
I don’t know. I don’t have the answers. The answers to curing HIV or the answers to the dubious methods of African politics.

Frankly, I’m just shocked that “Uncle Bob” Mugabe hasn’t got in on the act yet…

Just a quick update on the news from ballacorkish.net and from South Africa.

Let’s get the dull bit over first.Great news! My new RSS feed is up and running. This one is via Feedburner, so it should be universally acceptable. To subscribe, just click this little icon:

and we’ll tell you each time the site is updated.
It really couldn’t be simpler. (Unless of course the icon clicked itself.)

I’ve also spent a lot of time streamlining the page, so it should load more quickly than before and it’s also properly coded for the first time in years. The other pages on the site (pictures, Nix’s page and Alex’s page) will be returning soon. We’ll let you know.Meanwhile, in South Africa, it’s summer. You can tell this by just looking at the beautiful weather during this football match in Johannesburg on Wednesday evening. You know that I don’t put YouTube clips on here unless they’re really worth it. Don’t miss this – it’s amazing. Finally, the most unjust criticism of the new Faithless album To All New Arrivals, which I think is just lovely, came from my wife, who I think is just lovely too. She described it as:

“Good, but a bit Faithlessy.”

Proof, if any were needed, that you really can’t win when it comes to women.