There will be a short delay while our machinery crosses the road. 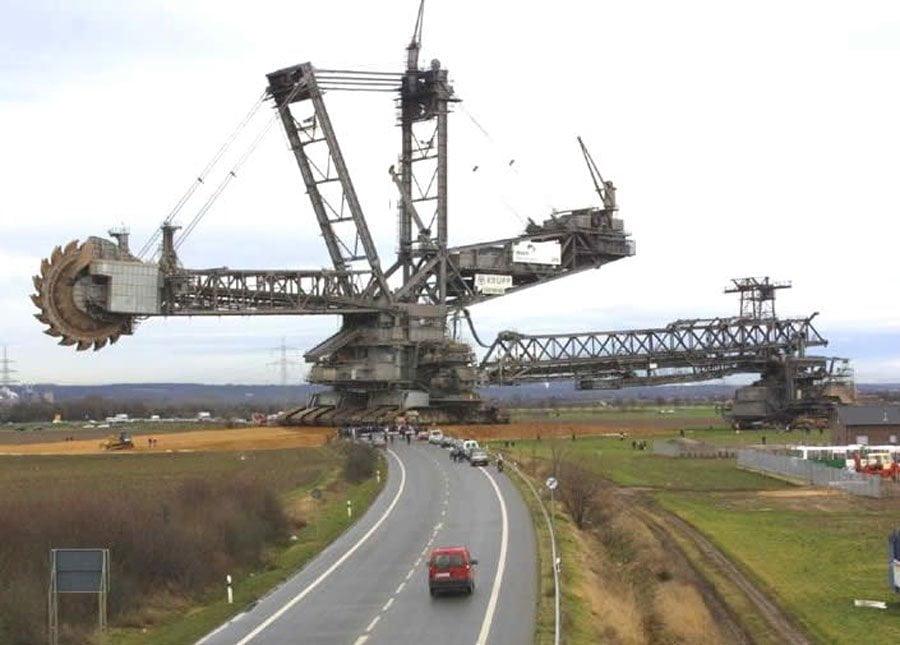 It’s probably not in your best interests to try and nip in front.

First, eat the leftovers of last night’s chicken jalfrezi for lunch.
Then head to the local Greek club and add a tzatziki-laden souvalakia.
Rinse energetically with liberal quantities of beer.

Mix thoroughly by playing an impromptu game of football in the sun at 2pm, while it’s 29°C in the shade.

The following day: avoid contact with all humankind for at least 24 hours, for the benefit of all involved.

And because that blogroll clearout post was so horribly admin, some entertainment for the weekend ahead with All Black rugby stars Cory Jane, Piri Weepu and Rene Ranger and demonstrating some audacious talent in training – this for a Rugby Channel ad in New Zealand:

Not to be outdone, Aussie players Josh Valentine, Adam Ashley-Cooper and Tyrone Smith hit back with their own version of the ad. It’s also fairly… “entertaining”:

There is a strong suggestion that at least one of these videos may have been faked to make the players appear more skillful than they actually are.

I’ll leave the decision as to which one(s) in your capable hands, dear readers.

Spar have featured a couple of times before on 6000 miles… with their notes about Ricoffy and their bizarre It DOES NOT INCLUDE CHUNKY outburst. Now they’re back at it, publishing a blame-shifting, buck-passing photocopied note from Alan Henderson CEO/BUGM of Simba (Pty) Ltd. on their shelves.
Here it is (bigger here): Simba make potato crisps, although it seems that they haven’t been making many of them recently.

But Alan has some good news for his Valued Customer – namely that the situation has developed in line with the scenario which he laid out in his last note. Pretty much, anyway. This either shows acute business acumen or some degree of clairvoyancy. I think I might get him to do my Lotto numbers this week. Pretty much, anyway.
Anyway, the upshot of his amazing predictive powers is that from the 20th September (“Week 39” in crisp speak), they should be up to full production with their contracted potatoes.

At this point, I’d like to pose a question: what sort of sicko company contracts potatoes to make potato crisps? That’s like getting a cow to work in a slaughterhouse or a bunch of grapes to help out at harvest time in Stellenbosch. I guess this comes down to workers’ rights again – you can almost see the fat cat bosses shouting down from the offices at their potato staff on the factory floor:

“Get on with it or you’ll be next to be peeled and fried! Muhahahaha!”

Alan then talks technical about his pipeline being relatively dry. I’m not sure what we’re supposed to take from this. It seems to me that you require some sort of prior knowledge of the potato crisp manufacturing process to work out what effect this relatively dry pipeline might have on the general supply of potato crisps. Is having a relatively dry pipeline a good thing or not?
I’m guessing that it probably is, as your crisps would surely go soggy in a damp or wet pipeline.

Clearly, as Alan says, he has an agro strategic issue to deal with. Damn straight – and that’s nothing to what he’ll have if Zwelinzima Vavi and his COSATU buddies find out how he’s treating those spuds on his production line. Then there’ll be real aggro: Potato pickers proactively picketing the potato plantation, preventing picking and prolonging the preparation and production of potato products. Possibly.

For that reason, Alan has drafted in Rod Robinson from North America to be his Operations Director. Rod is the guy that will be sent out of the barricaded Simba headquarters to receive the memorandum of demands from assembled hoards of aggrieved trade unionists and root vegetables. More pay, better working conditions, longer soil breaks, no compulsory slicing and frying our own kind etc. You know the kind of thing.
Poor Rod won’t know what he’s let himself in for. They might even peel him.

And what better time to strike as we approach the peak season? While Alan has high hopes for the last quarter now that the alleged seven week potato shortage is over, the Trade Onions may have other ideas.

The good news is that you will be the first to know via this blog. And Spar. And Simba. And Alan.

I’ve been here and there around the internet this last few days, so I thought I’d share what I’d found with you, hunter-gatherer style.

Firstly – one of my favourite bloggers. Yes, it’s Brian Micklethwait and his ongoing battle with technology – or just recording devices in this case:

Maybe I can get Cobden Centre supremo Andy Duncan to tell me how to use my recording gadgets without getting totally confused.  At present the only one I am any good at using is the hateful Sony confusaphone, hateful because it obliges you to go half way around the techno-world turning Sony files into a human (.mp3) files.  I bought another machine which doesn’t have this problem, but it has another problem.  It’s totally effing incomprehensible.

My new Sony Confusaphone (also known as the glorious new Xperia X10i) is also mentally taxing, but in a good way. Android certainly seems like a lot of fun, although I haven’t found much hugely useful to do with it yet.

Then onto Gina Loubser’s opinion on the whole @pigspotter issue which has divided a little tiny piece of South Africa not really down the middle. I’m with Gina on this one – namely that his tweeting the location of roadblocks and mobile speed traps is just wrong.

He may be a hero in the minds of many and he may have thousands of people following him, but he is still a prime example of someone acting on impulse in a public forum without any concept of the consequences of his actions on his own life and the lives of others.

It’s interesting to note that internet polls have come down firmly (like 90:10 firmly) on the side of @pigspotter.
I don’t understand why he warrants this sort of near fanatical support. Is it something to do with getting one over on authority? Does this make people feel good?
Cliff gives his reasons for his actions thus:

to stop corrupt police soliciting bribes from citizens, and victimising the public.

Yes, there are some corrupt cops in Jo’burg and that’s not good, but how does Cliff’s real-time revalations of their whereabouts assist to weed them out? Am I missing something here?

It’s bizarre and rather unpleasant watching as the brainwashed masses instantly and mindlessly lay into anyone who voices a dissenting opinion to the majority.
The thoroughly repulsive Clive Simpkins is one of the masses.
After I replied to a comment he left on Gina’s post, he refused to discuss the matter further:

Dear 6000, if you don’t have the cahunas to put your name to what you write, you’re classed as an Internet troll. I don’t waste time on them.

This while he is supporting a bloke who is called… er… “@pigspotter”.

There is a school of thought that says that Clive was just caught out by actually being asked to explain his actions and couldn’t, but it’s obviously far more likely that I am “an Internet troll” than that he is a hypocritical tosser.

Over to my mate Albert:

Right. Thanks for that.

Finally, something a bit lighter. I think, anyway. Peace Island.
We’ve all heard of Robben Island and Dassen Island and Seal Island and Marion Island and Easter Island and the Galapagos Islands and the Falkland Islands.

Well, this is apparently Cape Town’s answer to the Palm and World Artificial islands built in Dubai.
Yes, really.

The developers envision and economically and ecologically sustainable development in which upscale housing, trade and tourism opportunities fund and enable low cost housing and contribute to the developmental objectives of the South African Government.

Apparently, the project would require 165 million m³ of sand and 4.2 million tonnes of rock. To put that in perspective – my kids’ sandpit is nowhere near that big and has no rocks in it at all.

But if it really is a pie-in-the-sky late April fool, someone has gone to a lot of work to put it together, albeit that the spelling and website are a little shabby.

No names though, so Clive probably wouldn’t give it the time of day.

That creepy bald dude is using his superior “communication skills” to trash talk you on his stream. Please tell him it’s spelt CAJONES.

This would be HUGELY amusing if I was indeed furious or if vasectomy involved anything to do with the testes, which it doesn’t (that would be a orchiectomy). So it’s actually not that amusing.

Oh – and the spelling thing is addressed here:

For some people, apparently, a Hawaiian word for “priest” has ended up as an English euphemism for “testicles”.

Not great use of language from Mr Communication. Yet another reason not to hire him.