Although it pains me to say it, the 2009 Kids in Tow Tour is slowly but surely drawing to a close. And – as with all holidays – it’s had its ups and its downs. Fortunately, the highlights have far outweighed the negatives and – because I blog for myself as much as anyone else and I find myself with a few rare spare minutes – I think I should list them. That way, when I get back home to Cape Town (which apparently got washed away while we were here), and it’s grey, cold, wet, depressing and my zebras have gone missing, I can quickly and easily refer to this post and remind myself of the great time we had here. Which will cheer me up for all of 3 seconds. My brain is not easily fooled.

And there are still 5 days remaining before the (literally) long haul back to Cape Town. It seems to have passed like wildfire, but at the same time (as is the way with these things) I can hardly remember details from the beginning of the trip. That could be down to old age or red wine though. Or, more likely a bit of both.

And – as a bit of a disclaimer – I’m not mentioning the obvious stuff like seeing family and friends. That should go without saying. Although I just said it.

Photos still available (and being regularly updated) on the only official 2009 Kids in Tow Tour flickr set. And yes – another quota photo. But a pretty spectacular one, I’m sure you’ll agree. 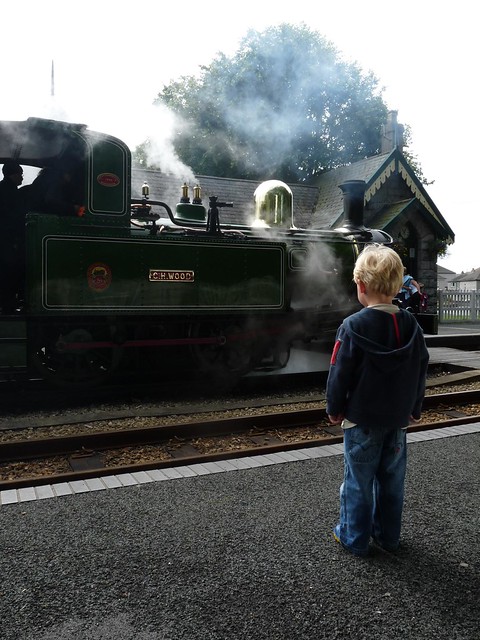 It’s a train, originally uploaded by Ballacorkish.
I will describe these events in more detail sometime in the near future.

Not me. I have family deluxe, since we were joined by my brother, his wife and their 40kg farting rottweiler this morning. However, obviously, some people don’t have the luxury of companionship (whether or not it’s a flatulent canine) and may require some assistance in avoiding loneliness.

And they suggested: Isle of Man Fish Dating.

I haven’t delved too deeply (if you’ll excuse the pun), as the “woman” with the fishbowl in her hand on the front page scared me off by being too manly. I’m not sure why anyone would want to date a fish, but I have heard that there are certain genres of Japanese “adult entertainment” which revolve around octopuses. Maybe this is similar?
Cod only knows.

The UK Dating Group which runs this odd contact site is also responsible for lovegundating.co.uk which urges you to “Just point and click” and is designed for those individuals who lose it it bit when relationships end.  Especially those with access to firearms. Shockingly, all the faces on the lovegundating site are the same as those on the IOMfishdating site. Maybe they only have 7 members. Still, that’s three happy couples.

And Penny (49), who is destined to remain single. Forever.

When I was a kid, Lifeboat Day in Port Erin and Port St Mary were big days in the the social calendar. And thus, today, we headed down to Port Erin to watch the raft race, let the boy release some energy on the beach and climb all over the £1.5 million Arun class lifeboat moored just outside the breakwater in the bay. He didn’t break anything – those boats are made to survive storm force conditions – not even Alex can match that. I hope.

It was also a chance to play with the new camera and take numerous photos of the events, the family and of Port Erin. This one of fishboxes stacked along the breakwater is my particular favourite, although it makes the weather look a whole lot worse than it actually was. I also got some of kids jumping off  the back of the breakwater and of the lifeboat heading out back round to Port St Mary at the end of the proceedings.

The rest of the photos are available (as always) on flickr.