Yet another so-called anomaly pounced upon by the conspiracy theorists when it comes to the Cape Town water crisis is that of the Table Mountain dams.

Yes, there are five dams on the top of Table Mountain. They were built there during late 1800s and early 1900s as the population of Cape Town expanded and more water was required. Maybe we should have tried this idea more recently too. Anyway, you can still visit the dams on the top of the mountain (but be careful) and you can still see a lot of the late Victorian infrastructure running through Newlands Forest. 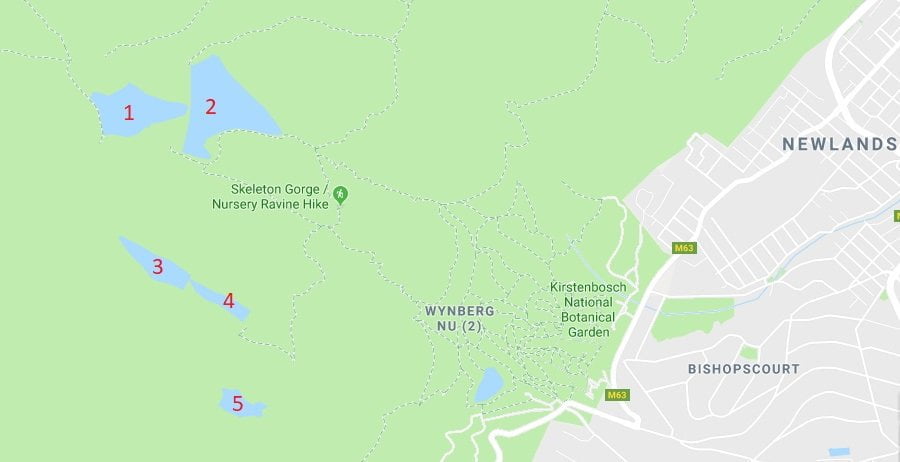 The dams are  Woodhead (1), Hely-Hutchinson (2), Victoria (3), Alexandra (4) and De Villiers (5). The other blue area towards the suburbs on the right is the Kirstenbosch dam, and doesn’t count here.

Anyway, there are two questions that people are asking about the Table Mountain dams. Firstly, why are they so full compared with the other dams out east (79.9% vs 25.9% on February 1st)?

Table Mountain is a 1km high lump of rock surrounded by very little other stuff which is 1km high. Its location right down in the very bottom corner of Africa, ostensibly bordered by the Atlantic Ocean on 2½ sides means that it has its own microclimate and is a veritable magnet for rapidly condensing air. It’s regularly moist on top. It’s one of the reasons that the dams were built there in the first place (the other being the use of gravity to produce water pressure).
Newlands’ proximity to the mountain explains why it is so wet compared with virtually every other Cape Town suburb. And also why it’s dark there by 2pm every day in winter. So yes, the top of Table Mountain is more regularly wet than most anywhere else in the metropole (including Newlands).

And that’s why those dams are fuller than you might have expected.

Next question – why aren’t we using that water?

Well, right now, any water is good water. So don’t get me wrong when I tell you this. But there’s actually not much water in those dams, even when they’re full.

Even if we could (and did) empty what’s in those dams, it would only give Cape Town about 4 days water, which is certainly not to be sniffed at, but is not going to save a doomed city of 4 million residents either.

I hope that has answered your questions.
Have a special day.