Tagged by London blogger and member of the MEC (Mutual Enjoyment Club), Brian Micklethwait in a lighthouse post? I had better document that.

Brian shares a photo of a poster in a shop window; a poster featuring 12 Brittany Lighthouses, which I love, and which I have half-inched to share here:

Two things I noted about the poster (which I now want for my study wall). Firstly, the second lighthouse from the left is La Jument, a 48m high stone tower built in 1911, and apparently “The most famous lighthouse in the world”. Why the fame? Because of this famous (see?) photo by famous lighthouse photographer, Jean Guichard, which has sold over a million copies. 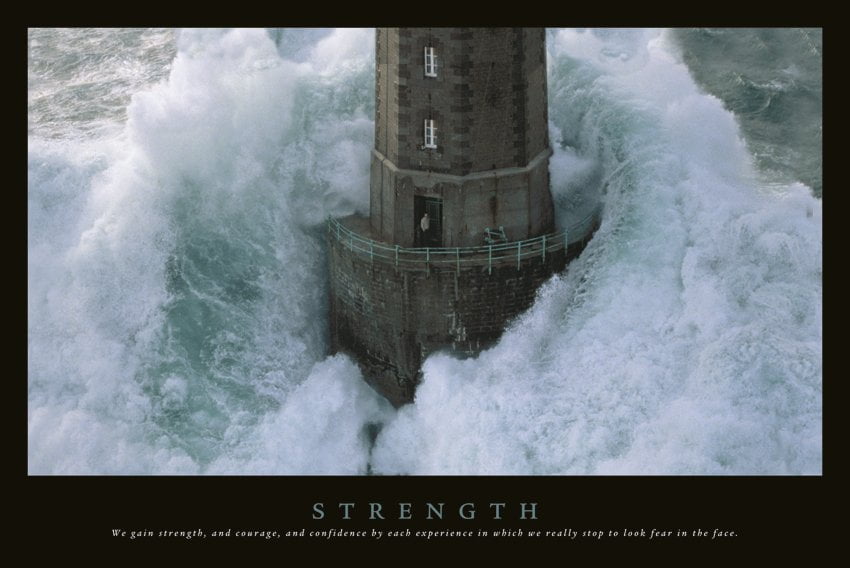 But you must ignore that motivational crap about looking fear in the face, because when the photograph was taken, the lighthouse keeper Théodore Malgorn (for it are he in the doorway) had no idea that the wave was coming, as this account testifies:

Malgorn, suddenly realising that a giant wave was about to engulf the structure, rushed back inside just in time to save his life. In an interview he said “If I had been a little further away from the door, I would not have made it back into the tower. And I would be dead today. You cannot play with the sea.”

The photograph – taken on the 21st December 1989 – won second place in the 1991 World Press Photo awards. (The winner was Guichard’s compatriot Georges Mérillon.)

Aaannd the other thing that interested me particularly about the post was the “coffee cup rings” over each of the towers. I don’t think that they are actual coffee cup rings – I’m hoping that they are examples of light characteristics – a representation of the sequence of flashes that differentiate and identify each lighthouse.

My theory is supported by the fact that La Jument (remember that? It’s famous, after all) has a light characteristic of Fl 3 R 15s that’s 3 flashes of a red light every 15 seconds. And look at its coffee cup ring: 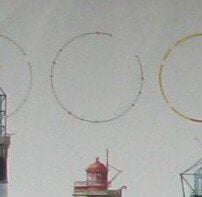 Assuming that ring makes up a minute (and ignoring that awkward gap, top right) I can see three flashes 4 times there.

It’s this sort of technical detail which I love about posters like this. It makes it less of a picture and more of a document. And just as I know that my readers needed to know who won the 1991 World Press Photo awards, I know that you’ll want to know the full light characteristic for Cape Agulhas lighthouse. And that is: Fl W 5s 31m 30M – a white light flashing every 5 seconds, 31 metres above sea level and visible for 30 nautical miles. .

Other selected lighthouse light characteristics include (but are not limited to):

Lighthouses, eh? I’m a sucker for them.