Kaboom. Every now and again, there comes a time when we discover something so utterly amazing that we have to immediately share it with you, the esteemed readership of 6000 miles…

This is one of those times.

Because I have discovered a site devoted entirely to bollards in London, handily entitled “Bollards of London“. Yes, that’s bollards, the singular of  which is defined as “one of a series of short posts for excluding or diverting motor vehicles from a road, lawn, or the like”.

Yep – this site is full of photos and painstaking descriptions of bollards. Who would be interested in bollards, you might ask?
These people would: 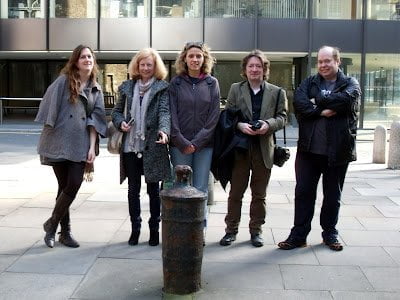 And yes, before you ask, that is an inverted cannon bollard.

What a beautiful piece of street furniture, the fact it just sits in the middle of a paved area with its beautiful rusting tapering body (outwards) with a narrowing curved top that leads to an almost door knob type handle.

And here’s a description of how and who found it:

My fellow ‘bollardarians’  from left to right @sophontrack @itsyourlondon @AboutLondon @Rigsbyhatstand and @philipkelly29 with the upturned ‘cannon’ bollard in the foreground. I will take this opportunity to thank them all again and to let you know it really was a hunt for this wonderful piece of street furniture. At the beginning of the ‘hunt’ we had a coffee on St Mary’s Axe not 100 yards from this site, it really was a bollard hunt/search with plenty of other little treasures found along the way. Badges are being prepared and made for this great bunch of people.

A wonderful hunt with lots of treasures (a coffee shop) found along the way. Pfft. Why would anyone be interested in… wait. What? There are badges?

I WANT A BADGE!

If you want a badge from Bollards of London, you’ll have to go bollard hunting. In London. And if you’re going to do that, then why not visit Leadenhall Market after trying some LSD?

If you do want a different place to visit in central London the Leadenhall Market is most unusual because of the colours/artwork/bollards/dragons which you’ll find everywhere. In part two of this post I’ll reveal the bollard I was looking which we found in the most unusual place.

Dragons everywhere? Riiiight.
Incidentally, “unusual place” in which they found the bollard turned out to be on a road, which didn’t seem that unusual to me. If they’d found it up a tree or in a lift, I would have considered it more “unusual”, as it is, I consider it disappointingly “usual”, aside from the fact that they then wrote 500 words about it. That strikes me as being a little unusual.

It’s only a matter of time until I begin the Bollards of Cape Town blog but I have some way to go to catch up with the prolific Bollards of London, who are well over 200 posts, each one of them about bollards. In London.

5 thoughts on “Bollards. Bollards of London.”