FIFA President Sepp Blatter’s visit to South Africa to inspect preparations for the World Cup in 2010 appears to be a big success. Despite the unfounded concerns of a vocal minority, all ten stadia are on course to being ready in good time for the tournament. Addressing those sceptics, Blatter said:

They have to admit the stadia will be ready, people will be well received and so on.
What is needed, instead, is a little more enthusiasm in South Africa;
for the whole country to say … yes, let’s go, let’s do it.

It’s about time South Africa got some good publicity from the world’s press over 2010.
However, many of the reports I have read of the FIFA visit have been very keen to mention the political issues dominating our news at the moment and also the crime rate, which they are lining up as their big story of the tournament. I can already see the “FAN MUGGED!” or “TOURIST STABBED!” headlines being readied. Because that sort of thing only ever happens in South Africa. Never in London or Hamburg or Rio. Oh no. 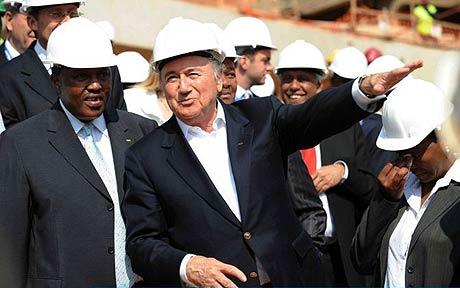 “When I left the plane and arrived on African soil, I started dancing.”

In addition, much of the stadium construction work is ahead of schedule. Which is better than Athens 2004 or er… Wembley. Is that actually finished yet? I mean – really finished?

Work is ahead slightly ahead of schedule at Durban’s semifinal venue, and at the two stadiums in Johannesburg. FIFA general-secretary Jerome Valcke said that even Beijing’s “Bird Nest” Olympic stadium looked small compared to Soccer City. Even Cape Town’s 3.9 billion rand or $490 million stadium – the most controversial because it is in the middle of prime real estate – is on track.

Now the naysayers and the critics have had their naysaying and criticism, I wonder what they think will happen to the World Cup in 2010? Do they honestly still believe that it’s not coming to SA?
Or is this just now a case of sour grapes?

12 thoughts on “Blatter dancing for joy”