Firstly, I’d better explain to overseas readers what the Banting diet is (because contrary to the alleged “Much Bigger Than That Oscar Trial” billing of the recent HPCSA hearing in Rondebosch, virtually no-one outside SA has actually heard of it) – it’s a Low Carbohydrate, High Fat eating plan.
And it’s currently all the rage amongst several very vocal and very affluent people in South Africa.

Banting And Chips. That’s going to be the name of my new cookbook. I’m told that other people have done Banting cookbooks, and apparently they’ve been mildly successful, but having looked at the Banting diet, I noted one omission that, if remedied, could make just about every dish therein better: Chips.

Allow me to demonstrate:

It’s like the best bits of the Banting diet, fully supported by their cherry-picked stats and lack of peer-reviewed papers, together with the added The Joy Of Chips™. Best of both worlds. Quite why no-one has thought of this before is beyond me.
Sales are going to be through the roof. Everyone will be doing it soon. Dodgy reporters with foreign sounding names will be paid to report on it on second or third rate news sites. I will be loved. More.
All that said, I’ll probably stop short of using social media to advise mothers to feed their young children on it. Because even though I’m an accomplished scientist, I have no qualification in paediatric nutrition. So I don’t really know about that sort of thing. Would be silly to do that. So I won’t.

If you’re doing the Banting diet, that’s lovely. I’m happy for you. You can even tell me about it if you like. Oh yes, you already had. I do recall now. But…

If you’re in SA (or even if you’re not), you’ll almost certainly be aware of what Mandela did for this country. And sure, yes, he has his detractors, but I think you’d have to argue that his 67 years of selfless struggle, his calls for forgiveness and unity when SA was on the brink of civil war, and his spectacular ambassadorial role around the world, even into old age were something very special.
HERO TIM DID MORE THOUGH! And in such a short time too.

The L key is never closer to the N key than when you’re talking about Prof Tim’s cult following.
Because wait, there’s more: 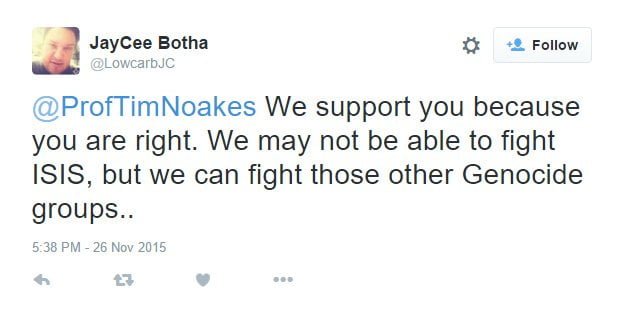 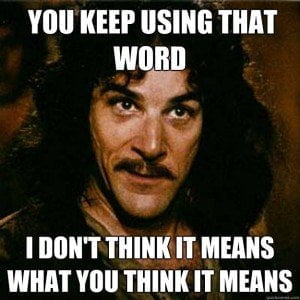 Yeah, I’m equally lost, but I can only think that “@lowcarbJC” (I never trust anyone with a football team name in the twitter handle to be a reasonable individual, let alone a frikkin’ diet tip) is referring to anyone that thinks it’s OK to eat carbs as a “Genocide group”. Frankly, it’s incredible that the human race has survived this long without Tim advocating bombing Syria. Or something. Perhaps that’s why “we” (whoever “we” are) are unable to fight ISIS. Perhaps it’s merely because Tim hasn’t given us the go-ahead. But then, why bother? Unless ISIS are all on LCHF (which they’re surely not), presumably they’re going to be dead soon anyway. That would save a lot of bother.

I wonder, has anyone told Mr Putin?

The only advantage of the Banting diet as far as I can see is that once those people doing it succumb to premature cardiovascular disease, we can have their oily remains melted down to make candles to sell for charity.

Hmm. I appear to have strayed somewhat from my original cookbook promotional plan.
I’ll let you (and lowcarbJC) know when I’ve shamelessly stolen some egg white and cauliflower-based recipes, added fries to them and written it all down.

6 thoughts on “Banting And Chips”