Up until today, my favourite phobia was arachibutyrophobia. It’s that one that always comes up in pub quiz questions and I know what it means. This makes me look good while others flounder around looking for links to spiders and stuff.
But this is “arachi”, not “arachno”. And “arachi” refers to ground nuts.
That’s why arachibutyrophobia is “the fear of peanut butter sticking to the roof of your mouth.”

Although I like it, I’ve never quite understood it. Why would someone be afraid of having peanut butter sticking to the roof of their mouth? What harm will it do up there anyway? Why not just lick it off with your tongue? That’s what it’s there for. Or maybe just avoid eating the peanut butter in the first place, thus negating any chance of palate adherence.

I turned to the internet to help me out with the peanut butter thing:

Last time I pulled it out in the public crowd, two women fainted. They were probably phallophobic.

All this is immaterial now though, because I have a new favourite phobia, as mentioned in the title of this post: 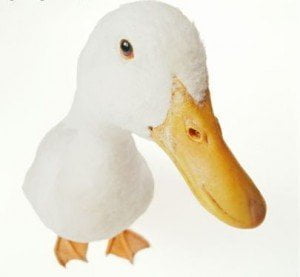 I’ll cut to the chase here: Anatidaephobia is the fear that you are being watched by a duck.

Like this fellow here.
Who, I have to say, has been made to look a whole lot more menacing by the use of a somewhat hectic camera angle. He’s probably completely harmless and even if he isn’t, he’ll be easily distracted by some small pieces of bread flung in his general direction.

He is not spying on you.

Anatidaephobia is an intense, irrational fear that one is being watched by a duck. Sometimes that fear can become so intense as to completely stop a person’s ability to maintain daily functioning. Unchecked, Anatidaephobia can become a debilitating condition that interferes with the person’s social life, their personal life and job responsibilities. Untreated, Anatidaephobia touches every aspect of a person’s life.

Still, put yourself in the position of the duck. He’s done nothing wrong. This is an irrational fear, remember – like the string thing. And he has a whole lot more to fear than you do. Foxes, pollution, people thinking he is watching them. Constantly… watching them…

A little known fact is that most ducks are also arachibutyrophobic. So, if all else fails and your local duck seems to be around ever corner, in your meetings at work, in the back seat of your car on the way home: if he’s watching you in your damn shower, for god’s sake!!!!, then simply lace your decoy bread with Black Cat Crunchy and your duck will be gone.
And with it, your anatidaephobia.

You can thank me later. It’s a pleasure.