Oh shucks, this is wonderful.

Many thanks to The Guru for alerting me to this one. And those thanks may seem strange given that “this one” is actually the:

DRAFT REVISED POLICY FOR THE ALLOCATION AND MANAGEMENT OF FISHING RIGHTS IN THE OYSTER FISHERY: 2013

which isn’t something you’d want to thank anyone for sticking in your inbox, right?

But that would all change once you got to Section 4.1 (c) on page six, under the heading “Objectives”.
And that change would be brought about by reading these words:

I’m sorry, what was the “most importantly” bit again?

I know you won’t believe me, so in an effort to convince you that this is genuine, here’s the passage in question: 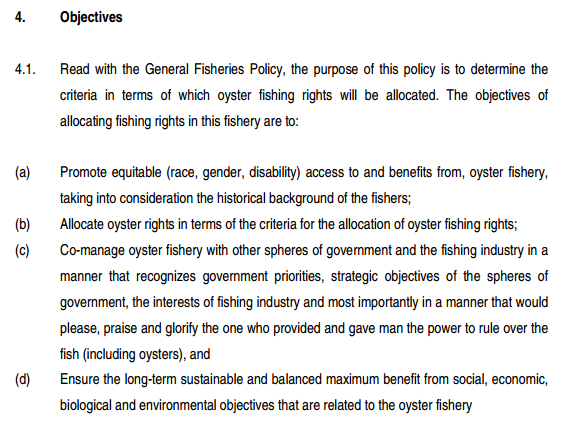 and for those continuing skeptics, here’s a link to the original document (and I’ve popped it here too , just in case it disappears from the DAFF website).

Looking at the objectives around (c), it’s easy to understand where the DAFF are wanting to take this. (a) is important, if still politically charged, (b) is an absolute no brainer and (d) is just pure common sense: symbiosis twixt oyster and man, albeit with a slight leaning towards the latter when it comes to overall benefits involving Tabasco sauce and lemon juice.

Indeed, even (c) begins with the best of intentions. In a democratic society, one cannot simply ignore the policies, aims and responsibilities of the leadership which was voted in. But then, even pleasing, praising and glorifying JZ et al pales into insignificance when compared with “the one who provided and gave man the power to rule over the fish (including oysters)”.

Note that the bracketed phrase is important, because this is a government document and must be accurate at all times – oysters are not fish, they are saltwater clams; marine bivalve molluscs of the species Crassostrea gigas (in the commercial sector, anyway).

Far be it from us to please, praise and glorify the one who provided and gave man the power to rule over the fish, because suggestions of that sort of behaviour would have absolutely no place in a draft policy document about allocation and management right within the oyster fishery.

And what fools we would appear then, hey?

This being a draft document, it seems likely that the “most important” part of Section 4.1(c) will probably not make the cut and get through to the final policy document. And that’s not just sad, it’s potentially dangerous too, for what ‘the one’ giveth, he can taketh away just as easily. Which would surely leave all the power with the fish (including oysters).

That being the case, I’d like to be the first to say that I, for one, welcome our piscine overlords.

UPDATE: Jacques points out that there is a serious side to this too.

3 thoughts on “An Absolute Pearl!”