Still, it does, on occasion, come up with some interesting moments.
Here’s one now:

First off, Pooilvaaish (to give it the correct spelling) is still a place: a small collection of dwellings on the eastern side of Bay Ny Carrickey, with beautiful views across towards Port St Mary, and the mouth of the harbour where John Comish perished. Interestingly, its name translates from Manx Gaelic as “Pool of Death”. Nice.

And secondly, yes, there are newspapers from back then, although there’s no mention of what happened to John Comish. There is a lot about a tremendous and devastating storm which occurred “Tuesday last”, and which mentions PSM harbour, but that was the 24th September – the 22nd was a Sunday. So, (not having done a lot of further digging) I can’t see anything specific about his death.

However, that newspaper report is still worth a nice long read, as it does include some other really interesting stuff: 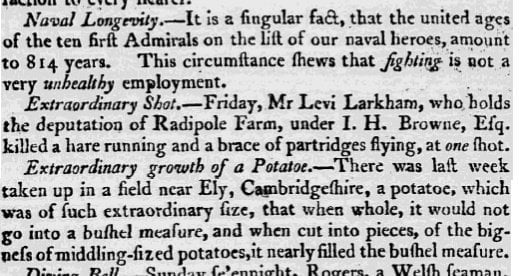 Let’s get them documented:

Either that or pickling with rum is a very effective preservative.

But then there was this:

The fact that these 3 pieces of “light-hearted”, trivial news made it into the one page of the newspaper suggests to me that either the editorial staff weren’t really that concerned about other, more serious news, or more likely, that there actually was very little going on in the Isle of Man. That latter fact hasn’t really changed much in the intervening 200 or so years, as this other post, including connections to both the Isle of Man and potatoes, demonstrated.